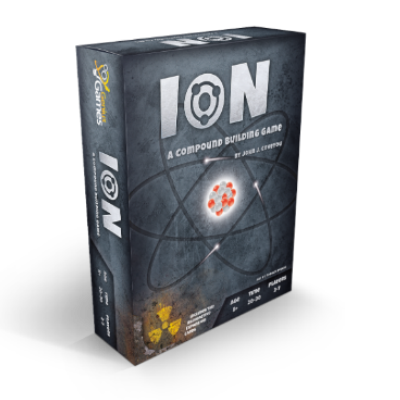 Ion: A Compound Building Game is a simple card drafting game where players select from a number of available ion cards and noble gas cards, with the objective of forming either neutrally charged compounds or sets of stable noble gases.

Each player is initially dealt eight cards. They choose one card and pass the remaining to the player on their left, while they receive the same amount of cards from the player on their right (this is commonly referred to as “card drafting” or “pick and pass”).

Selected cards must be either (1) bonded to another ion or (2) set alone. Players only score points for neutrally balanced cards. So a positive charged Sodium (Na+) bonding with a negatively charge Chloride (Cl-), forming a neutral NaCl compound, would score points.

Points are scored at the end of each round and player may gain additional points for building specific compounds listed on the goal cards for that round. After three rounds the player with the most points wins!

The game comes with multiple expansions including a Transition Metals expansion, a Polyatomic Ion expansion, and a Radioactive Card expansion.