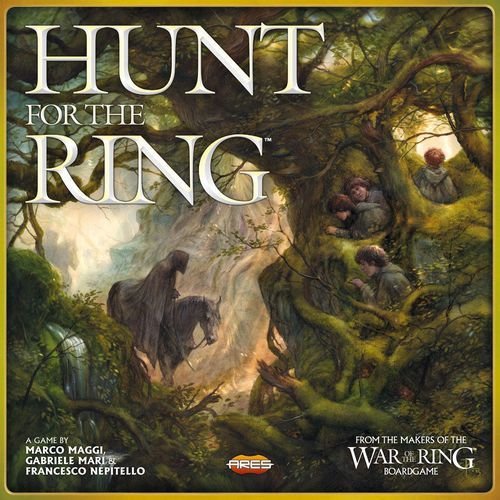 Hunt for the Ring

The Hunt for the Ring™ is a game of hidden movement, deduction and adventure, faithfully recreating the initial chapters of THE LORD OF THE RINGS™.

The game is a battle of wits and takes you upon a new journey across Middle–earth. One player must bring Frodo Baggins — the Ringbearer — and his hobbit friends from their home in the Shire to the sanctuary of Rivendell, where the fate of the One Ring will be decided. Using secrecy and the help of powerful allies, the Ringbearer must escape the chase of the Nazgûl, the terrible Ringwraiths, controlled by up to four other players. The Ringwraith players work together to find Frodo and recover the Ring for their Dark Lord, while the Ringbearer secretly tracks his path first from Hobbiton to Bree, then from Bree to Rivendell, on a double–sided game board.

Created by the design team of the best–selling War of the Ring™ together with Gabriele Mari (designer of Letters from Whitechapel, Mister X, Garibaldi), Hunt for the Ring features amazing cover and character art by John Howe, seven highly–detail miniatures sculpted by Bob Naismith, and a beautiful game board by Francesco Mattioli.