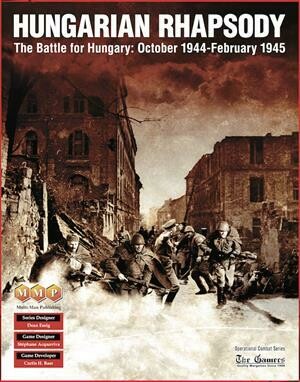 Hungarian Rhapsody depicts the Soviet drive into Hungary which led the Red Army into the Vienna basin. Rumania's defection in August 1944 allowed the Soviets to outflank well defended Axis positions in the Carpathian Mountains through the South. In the process, the German 6th Army was almost destroyed, losing most of its heavy equipment (which explains the relative weakness of the German artillery at the start of the campaign). The game begins on 5 October 1944 with the 2nd Ukrainian Front and the 4th Ukrainian Front launching an offensive to isolate the German 8th Army which is still defending an area off-map to the East in the Carpathian Mountains.

Hungarian Rhapsody is the next game in the award winning Operational Combat System (OCS #18). Players control units ranging from battalions through divisions, making key decisions on the use, objectives, and means of war. The series is based on modern concepts of maneuver warfare and allows players a far more insightful look into how campaigns (large and small) really work.

Special rules in this 18th OCS series game are carefully researched to model key aspects of this important campaign: