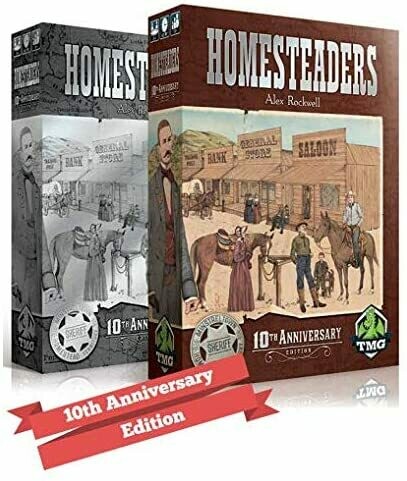 The Homestead Act of 1862 allowed Americans to claim undeveloped land by living on and farming it for five years. Also in the 1860's, the Transcontinental Railroad was built across North America, linking rail networks between the East and West coasts. The development of railroads accelerated the spread of homesteaders colonizing the West and led to the rapid cultivation of new land.

In Homesteaders, players are settlers in the Old West, claiming land to develop into a town. The player who contributes the most to building that town into a city will have the city named after them and be declared the winner.

Homesteaders is played over the course of 10 rounds - with each round having an income phase, followed by an auction phase.

During the Auction phase, each player will have a chance to bid on the right to create buildings. On their turn, they will either issue a new bid, or pass. Once a player has passed, they can no longer take part in the auction phase, but they will move up the Railroad Development Track as consolation.

Starting with the player who won Auction #1, each winner will choose an available building that they have the resources to claim. After each player has chosen a building, the players will return to the income phase and start the process over.

After 10 rounds, there will be one last income phase without an auction, and the player with the most points will win the game of Homesteaders!