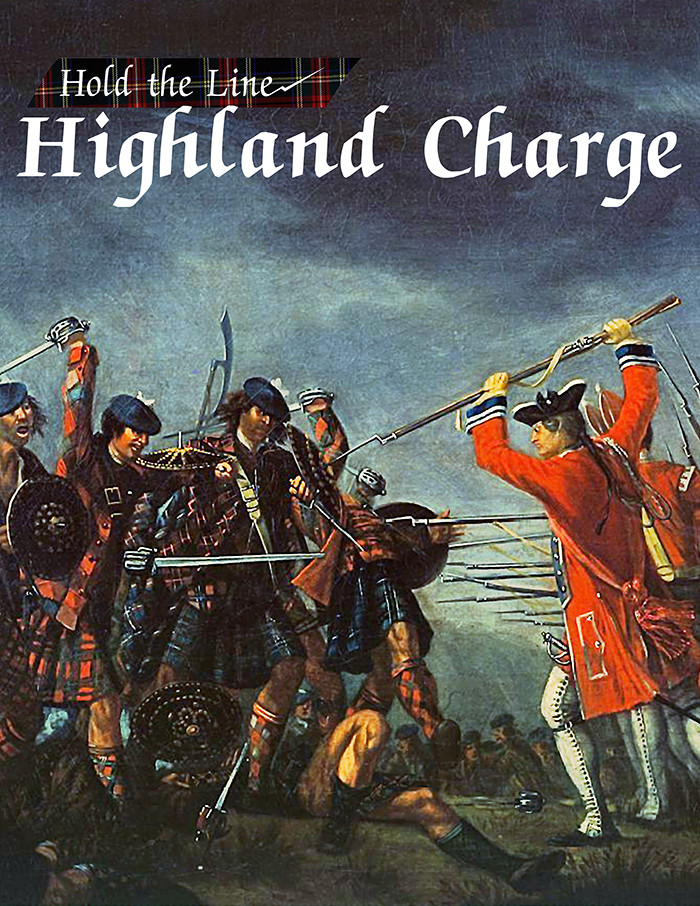 HOLD THE LINE now looks at one of the most fabled conflicts in history, the Jacobite rebellions, in HIGHLAND CHARGE. These uprisings were, as of 2013, the last battles fought on British soil. Featured here are five battles from the fearsome contest: Sheriffmuir, Glen Shiel, Prestonpans, Falkirk, and Culloden. On Worthington's website they are offering Killiecrankie scenario free to download. The game closely aligns with the Hold the Line system, but includes rules for Highland charges, Scottish militia, and of course the feared Highland clan units.

James II lost his throne in 1689, but he and his supporters did not give the fight to reclaim his rights and titles. From 1689 to 1745 no less than four major Jacobite rebellions broke out in the Scottish highlands, often with limited aid from France and Spain. The battles were the last hurrah for a dying way of war. The Highlanders relied on assault tactics, in particular the feared Highland charge. The Loyalists, made up of British regulars and Scottish militia, used the linear tactics of the day, including volley fire, artillery barrages, and bayonets. For a time the Highlanders seemed to be tactically superior until the shattering defeat at Culloden, a battle that proved the ultimate superiority of musket and artillery fire over the claymore.

As the Jacobites can you reclaim the throne for the Stuart dynasty? As the Loyalists can you protect the Hanoverian succession and deal a final death blow to absolutism in Britain? Across the way the bagpipes can be heard. The clans have mustered, the sound of cannon deafens, men shout commands, smoke fills the air. You must HOLD THE LINE!

You must own Hold the Line: Frederick's War to play the expansion set.