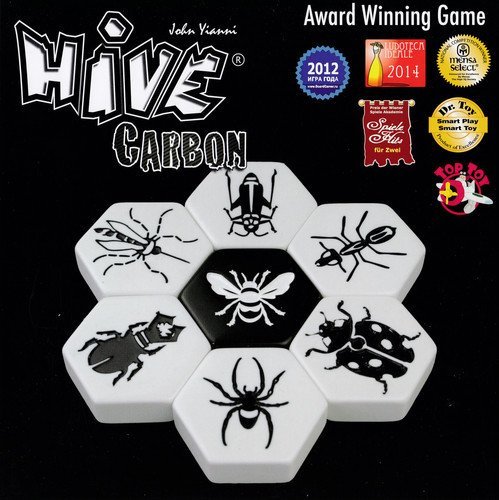 Hive is a board game with a difference. There is no board! The pieces are added to the playing area thus creating the board. As more and more pieces are added the game becomes a fight to see who can be the first to capture the opposing Queen Bee.

The soldier ants battle to keep control of the outside of the hive, whilst the Beetles climb up to dominate the top. Spiders moving into holding positions as the Grass Hoppers jump in for the kill. Keeping one eye on the hive and the other on your opponents reserves, the tension builds as one wrong move will see your Queen Bee quickly engulfed; .... game over!

The object is to surround your opponent’s queen bee while trying to block your opponents from doing the same. Each Player has 11 tiles; representing 5 different insects. Each insect has a unique way of moving (as in chess) and resembles the movement of the insect depicted on the tile.

The new “carbon twist” is an alternate to the traditional Hive game.
Hive Carbon is for those who prefer a classic black and white color scheme. This edition includes two bonus pieces, “The Mosquito” and “Ladybug,” expansions to the game which provide additional hours of fun!
Contents:
Added Value:
Enhance skills of strategic planning tactical thinking & spatial vision
Awards: