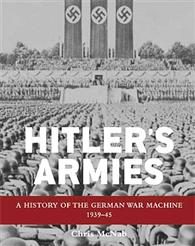 Hitler's Armies: A History of the German War Machine 1939-45

The definitive work on Hitler’s war machine charting its evolution from the formidable force which won stunning victories during the Blitzkrieg in 1940, to the hard campaigns it fought in the deserts of North Africa and the frozen wastelands of the Soviet Union to the eventual retreat to the Fatherland itself. Drawing upon Osprey Publishing’s unique archive, this volume expertly weaves together the story of the development and deployment of Hitler’s armies displayed alongside a stunning collection of original artwork and photographs to show the kit and equipment of the various land forces.