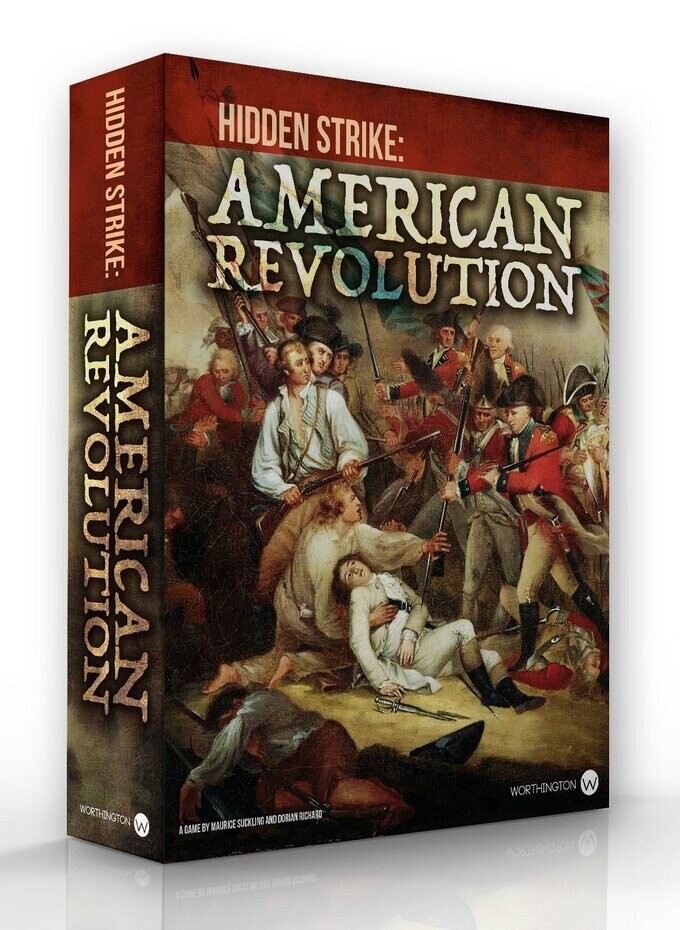 Hidden Strike: American Revolution recreates the struggle between the American colonists and the British forces during the War of Independence. Each side tries to win the war by controlling a majority of regions.

Confronted by overwhelming forces, the colonists will need strategy to defeat the larger British army and navy to gain their Independence. This is a card driven game, where players manage their hand of cards, usually playing just one card a turn to allow them to move tokens representing military forces across the board into key spaces at key times.

The game can be played in five different modes:

Each named region is highlighted with a key city graphically. American and British units contest for control of the regions.With limited force pools available to each side players must decide when and where to use their regulars.

There are six regions in the game, control four or more and win the game. Move units from force pools to engage the enemy in contested regions. Battle in land and sea as you seek to freedom from the British monarch. Americans can lay siege in region with the play of a siege card, requiring more British troops in the region for a chance to win.

Control cards that overlay the board to show region control

Once you win a region, you cover the region with it's unique control flag card.

Fleets Cards: These cards allow you to deploy Fleets. Fleets do not count towards a region total but have the ability to create or counter blockades.

Zero Point Cards: These cards do not automatically deploy a fleet or troop but instead give you the ability to interact with the tokens on the board in another manner like removing a Grenadier or promoting troops. Most of these cards have a secondary ability to deploy a generic Minutemen instead. Note that the amount of Minutemen available is limited so using the secondary function too often may exhaust your supply of Minutemen.

Some cards have additional “powers” referred to as abilities.

Each American player starts their turn by acting for the British. If multiple players are playing as the Americans, each player will act as the British during their turn before the play of their American card. Reveal the top card from the British draw deck and deploy the listed troop or fleet following the British deployment rules.

Markers come in various sizes. Each size has a value from 1-3. Small cubes are worth 1, medium 2, and large 3. Values are combined to create a force total in a region.

American markers can be promoted from Militia (a value of 1) to Regular (a value of 2), then from Regular to Veteran (a value of 3) with the expenditure of cards during a turn.

Each side’s goal is to win the war by controlling the most regions.

The first side to have 8 points worth of troops deployed in a region’s conflict zone, and to be 2 points clear (i.e. a minimum of 2 points ahead of the enemy), wins that region. The region is then considered ‘resolved’ and remains under control of the winning side for the rest of the game. Indicate this by placing the appropriate control flag card on the region number. Troops stationed in a resolved region become inactive and, for the most part, cannot be moved.

The game ends when one of these conditions are met: