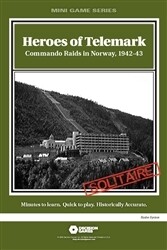 Heroes of Telemark: Commando Raids in Norway, 1942-43. The Third Reich was racing to develop an atomic bomb, the critical heavy water being provided by the Norwegian county of Telemark. Britain’s Special Operations Executive (SOE) waged a long campaign of sabotage to delay the German program as long as possible.

This is a solitaire game in the Raider series. Cards generate missions targeting parts of the German heavy water complex. You recruit SOE agents, British commando teams, and Norwegian resistance forces, along with various types of weapons and equipment.

Event cards generate German forces and a wide range of actions, including the possibility of a Gestapo raid. You must overcome them all to accomplish your mission.