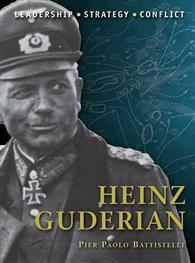 This book gives a focused, military biography of Heinz Guderian, perhaps the most highly respected tank commander of World War II. Guderian was a typical product of the Prussian military elite; the son of a general in the army, there was little doubt that he would follow in his father’s footsteps. Some consider Guderian to be the founding father of blitzkrieg warfare, and he certainly brought the whole concept to public attention and prominence, chiefly through the publication of his book Achtung Panzer in 1937. He commanded the XIX (Motorized) Army Corps in the 1939 Polish campaign, and Panzergruppe Guderian during Operation Barbarossa. In March 1943 he became chief inspector of the Panzer forces, but even the great tank commander could achieve little more than to delay the inevitable defeat of Germany.