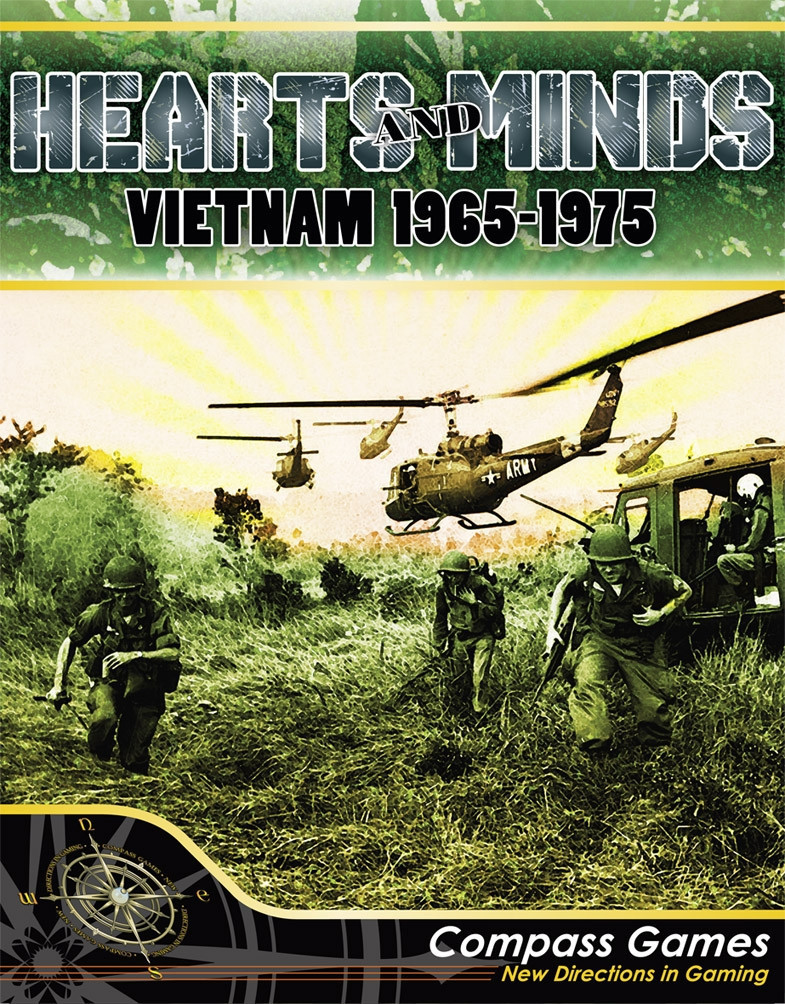 Hearts and Minds, Third Edition is an uncomplicated approach to a very complicated conflict. Eight scenarios introduce players to U.S. involvement in Southeast Asia including a scenario after the US withdrew from Vietnam, a full campaign scenario as well as high solitaire capability. Players appreciate the ability to start in any year of the war they wish and fight to the end of any other year of the war. The game provides a comprehensive historical approach using mechanics that include guerrilla warfare, faction differentiation, political turmoil, and veteran advantages. This design has already been used as a successful teaching tool.

This is a card-driven, area-based design with low counter density and a much simplified combat system. Each scenario represents a year and players have the flexibility of starting in any year of the war and ending in any later year of the war. Players choose either the Allies (US, ARVN, Cambodian and Laotian) or Communist (NVA, VC, Cambodian and Laotian) Players engage in guerrilla warfare – VC units remain hidden until engaged. VC units may be simple units or reinforced units or simply false information. When determined to be false information, players roll on the Bush Events Table which involve events from discovering Chinese troops to the arrival of USO shows featuring John Wayne and Bob Hope.

This edition involves the use of three card decks, a red deck (communist), a blue deck (Allied) and a black deck (interchangeable). Prior to every game, half of the black deck is shuffled into each of the red and blue decks ensuring a different game every time. Cards indicate the amount of RPs (Resource Points) that may be spent or banked, a historic situation, and its game effects. Certain cards are year specific. Within each Red and Blue Deck are a number of Campaign cards that may be chosen by each player allowing increased abilities but only in a predetermined area.

The game does not ignore political ramifications. Card events cover mass protests in the U.S. and more significantly the instability of the South Vietnamese government. The Allied player controls more firepower but must walk a tightrope between U.S. and ARVN (South Vietnamese) casualties. Too many U.S. casualties leads to a rapid rise in Communist morale.Too many ARVN casualties will result in a coup which has major strategic advantages for the Communist Player. While in Cambodia and Laos, the destruction of all government forces means the fall of those governments. Throughout the game both sides jockey for the “Hearts and Minds” in each province. Political Control determines the availability and expansion of VC influence.

Map - The Map is divided into provincial areas, indicating major cities and US major bases

Unit - Units are abstract and represent US, ARVN, NVA, VC, Cambodian and Laotian