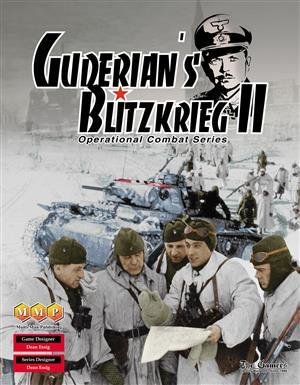 Guderian’s Blitzkrieg II depicts the German drive to capture Moscow in the fall of 1941 (Operation Typhoon) and the first Russian Winter Counteroffensive. In 1942, the German player can attempt another stab at Moscow, or conserve his strength to deal a death-blow to the November 1942 Russian offensive Operation Mars (as happened historically).

Guderian’s Blitzkrieg II is a reprint of the 8th game in the award winning Operational Combat Series. It mates with the 2007 CSR Award winning game Case Blue to show all of the Eastern Front south of Army Group North from 1 Oct 41 through the end of May 1943.

Owners of the 2001 printing of this game that have Case Blue do not need to purchase this printing. Owners that do not have Case Blue might be interested in this version because it incorporates the upgrades that occurred in Case Blue. In any event, the set ups, rules, and Orders of Arrival have been updated to the Case Blue Standards. Known errata in the original has been corrected.