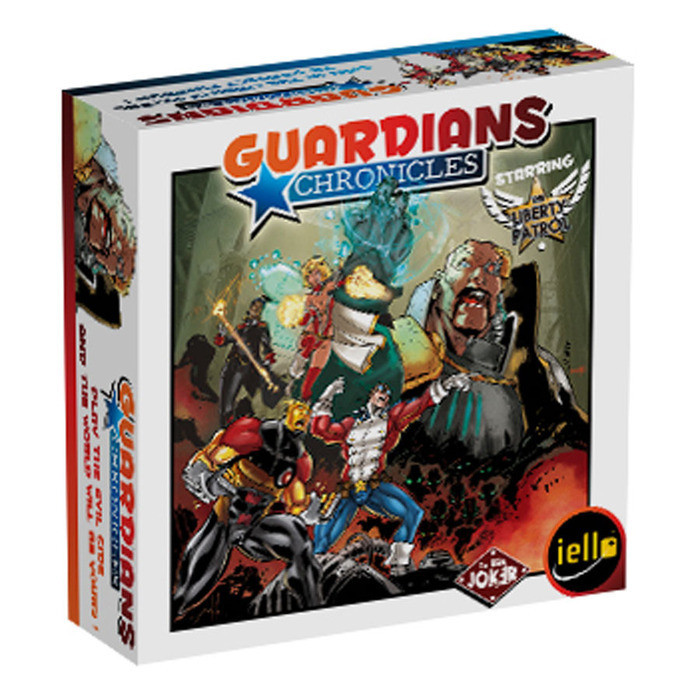 IELLO's Guardians' Chronicles is a semi-cooperative board game for 2 to 5 players where the Liberty Patrol is trying to defeat Doktor Skarov's evil plans!

Nuclear missiles, nightmarish experiments, robotic horde... when it comes to threatening the safety of our fellow citizens, Doktor Skarov’s villainy is boundless! The military and police are no match for his troops of emotionless minions, leaving the people defenseless. Fortunately, the glorious super-heroes of the Liberty Patrol swore to come to the rescue of anyone in dire need. The battle promises to be legendary!

Guardians’ Chronicles is an epic semi-cooperative board game that plays out the story of the conflict between the superheroes of the Liberty Patrol and their archenemy, the evil Doktor Skarov!

Work as a team and use your own, unique superpowers to overcome your enemy’s minions as you go further into the villain’s lair. As Doktor Skarov, control your robots and traps to keep the other players from success in each of the scenarios! Watch articles appear on the front page of The Guardians’ Chronicles as both sides get closer to victory, one achievement at a time.

Guardians' Chronicles provides an intense, immersive game experience, due to its abundant material (including miniatures of heroes, villains and minions!) and simple yet comprehensive game system.

Guardians’ Chronicles is intended to be the first of a series of games telling the adventures of the Liberty Patrol against ever darker threats and menacing enemies...