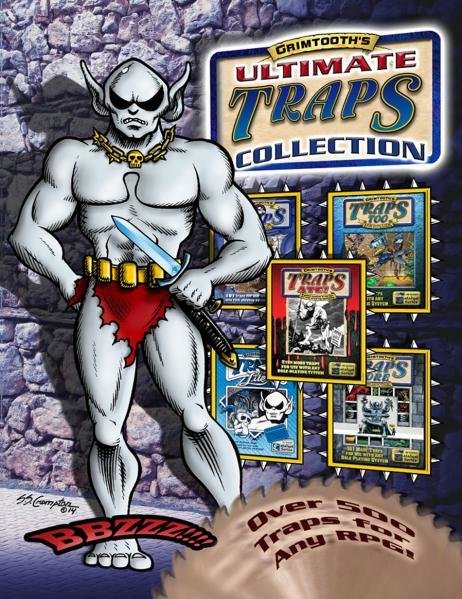 Produced in cooperation with Flying Buffalo, Grimtooth’s Ultimate Traps Collection contains exact reprints of all five Grimtooth’s Traps books. The 460-page tome details more than 500 traps in a systems-neutral format, suitable for any fantasy RPG. They are presented in their original, classic form. No updates, no rules revisions, no changes, and nothing to disrupt the entertaining formula that has led the Grimtooth’s line to sell more than 250,000 copies since 1981.

In addition, it is an homage to an important piece of gaming history. Featuring a foreword by noted dungeon designer Harley Stroh, the book also includes an extensive interview with the original Grimtooth’s creative team, a cover gallery showcasing 30 years of editions (in both English and many foreign languages), and a look behind the submissions process – including the legendary “Grimtooth’s Submissions Box” that sits on a shelf in the Flying Buffalo offices.

Finally, we’ve added more than a dozen new traps created specifically for this volume. For the first time in a decade, the Grimtooth’s submissions box has been opened again, and more great entries have been selected!