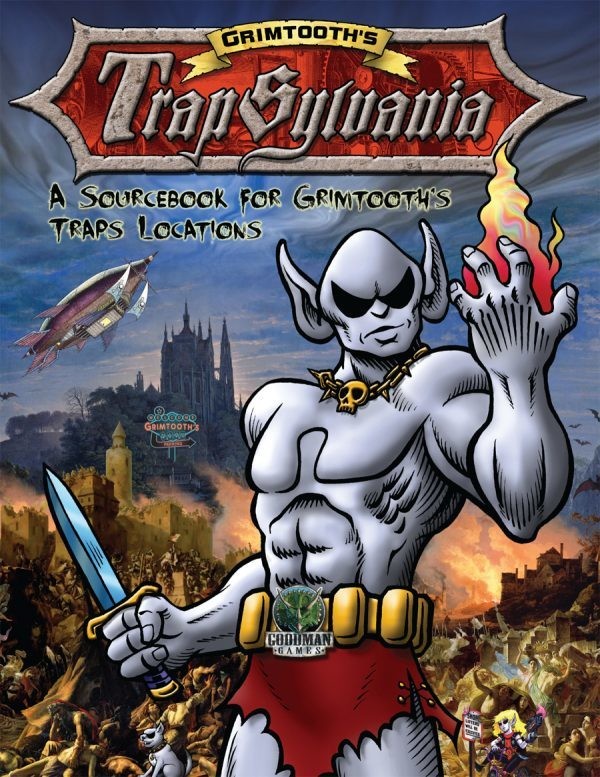 For the first time ever: the legendary locations of Grimtooth’s Traps revealed! And fully compatible with DCC RPG!

For over 30 years Grimtooth’s numerous Traps books have horrified players and inspired gamemasters with hundreds of dangerous devices, deadly deathtraps and hilarious hijinks! Now Grimtooth (with a little help from kid sister Grimtina) will take you on a personally guided tour of his realm and the central hub of his vast Traps empire.

Run your own Grimtooth campaign or pick and choose locations you can use in your own single location adventures.Explore Grimtooth’s caverns, visit his Inner Sanctum, escape the Deathmaze Testing Center, attend Warthog’s School for Trolls, take a ride on Grimtooth’s Airship, tour Grimtina’s Petting Zoo or get lost in the Infinite Corridor of Hallways and many more gigantic places of doom. Each of these infamous locations include maps, descriptions, Non-player character details, scenarios, all with in-depth DCC stats and lots of art by Traps artist SS Crompton.

And can you uncover the horrendous secret that lies deep beneath Grimtooth’s caverns and back into his family’s history? It’s a great read and a useful campaign setting all in one book.