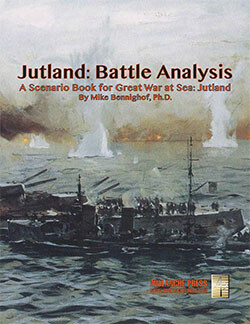 Jutland: Battle Analysis 1914 is different from other works on the North Sea campaign, thanks to its ties to our Great War at Sea: Jutland game. We look at how the game simulates the operations, and then we flesh them out with more battle scenarios – fast-playing actions using just the Tactical Map, where you fight out the battles between ships with guns and torpedoes.

Jutland, the game, has a lot of scenarios: 51 in total. Forty-four of those are operational scenarios, but only seven of them are battle scenarios. So the Battle Analysis adds 26 more of them, based on the surface actions that could have taken place – or at least one side hoped would take place – based on the expectations of one or both naval staffs when they sent the fleets to sea. Plus nine new operational scenarios.

Jutland is already a very fine game (our most popular ever, even more than Third Reich) and a good instrument through which to re-play history. The Battle Analysis makes it even more so, while adding more quick fun by fleshing out the battle scenario aspect of the game.

Jutland: Battle Analysis 1914 is a 64-page, large-format book supplement for Jutland; you’ll need a copy of the game to play most of the scenarios and Cruiser Warfare to play all of them.