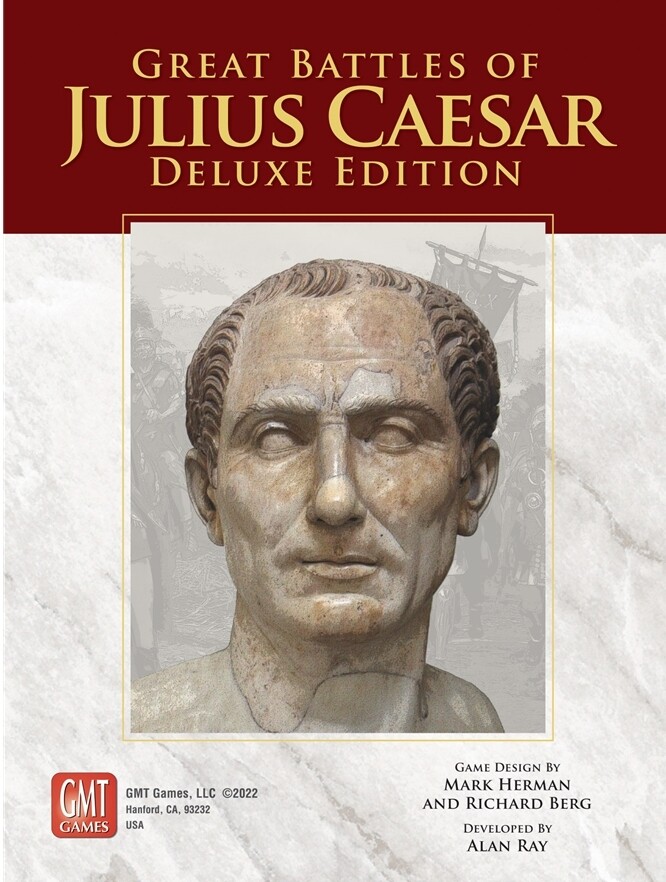 Great Battles of Julius Caesar will have a single rulebook brought up to the production standards of the latest GBoH titles, written so that all the land battles in the original games can be played from single rule book. The one naval battle has its own rule book.

The scenario book features 20 (!!) battles presented in a chronological order that traces the evolution of the Roman military system from early battles against various foreign foes, Caesar’s wars in Gaul followed by Caesar’s wars against his Roman rivals, and culminating with the Roman invasion of Britain a century later.

The complete list follows and includes the game/module where the battle appeared.

Rise of the Roman Warlords - Marius and Sulla

The scenarios vary in size from four large battles using 1 1⁄2 game maps to six small battles on a half size map with the remainder using one full size map. In addition to the Roman on Roman contests, the battles showcase the Romans facing off against a colorful array of non-Roman opponents- the Numidians, Germans, various Gallic tribes, and the Hellenistic style armies of Pontus. The counter mix includes 43 distinct cohort style legions, a host of specialty type auxiliary units, numerous tribal infantry and cavalry units, and some old favorites from SPQR – Elephants, Chariots, and even the double sized Phalanx. Along with the typical set piece battles, several battles feature the use of fortifications, one an amphibious invasion Roman style, and one a full blown naval battle.

The original maps will be updated to the latest GMT graphics standard and have the same look and feel across all the battles. The set will include a “blank” map for use with the Cirta and Bay of Biscay scenarios and new map for the Nicopolis battle – no more drawing in trench lines. The counters will be updated to the latest production standards and will be similar in style to those in SPQR. Additional counters are included to minimize the need for counter substitutions in those battles featured in the originally published as modules.

Simple GBoH scenario instructions are included for the Gergovia battle. The remaining battles are already covered in the Simple GBoH rules set.