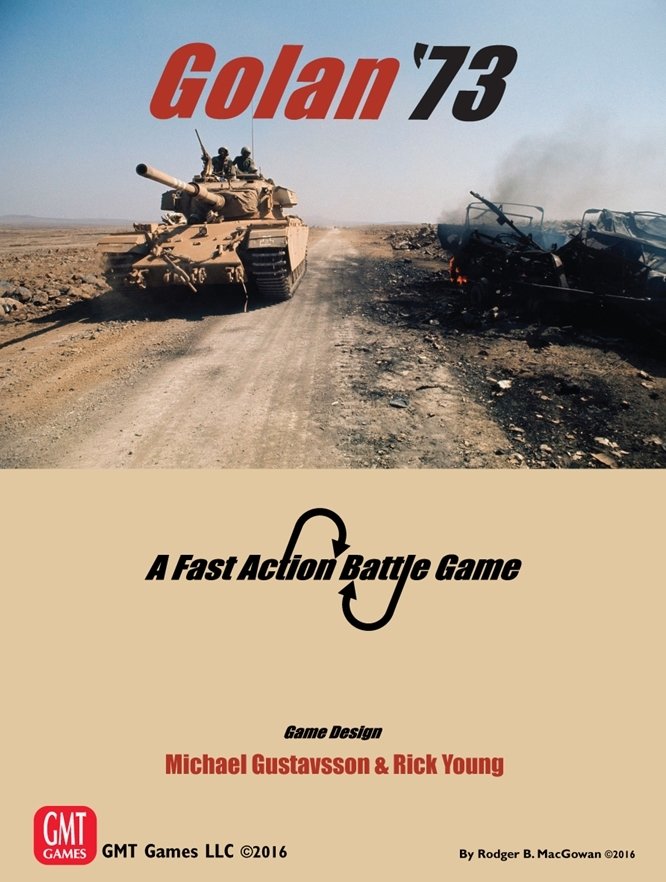 Michael Gustavsson teams up with Fast Action Battles (FAB) series designer Rick Young to jointly bring you volume III in the FAB game series. These two designers take you to the Golan Heights on October 6, 1973, where during the holiday of Yom Kippur, the silence on the Heights was disrupted by the thunder of tanks, guns, and aircraft when a Syrian assault was launched. The Syrian operation, code-named as Badr, was aimed to retake the Israeli-occupied Golan Heights, which the Syrians lost in the 1967 Six-day war.

In Golan '73, you will command highly mechanized forces and maneuver them across the rocky terrain of the Golan Heights. You will find new asset types to aid your cause such as SAM’s, mortars, and anti-tank guns. Battle specific events include Operation Dugman 5, Strategic Reserve Releases, the GHQ Air Raid, Lt. Zvicka Greengold, Electronic warfare, the Syrian Frog-7 missile strike and more. New terrain features in Golan '73 include escarpment, wadi, and the anti-tank ditch, known as the purple line. Helicopter-borne air-assaults and special rules for the first night are included to add more historical flavor from this important campaign.

The Israelis start with few units but gain strength as reinforcements arrive, but will there be enough and will they get there in time? The Syrian player starts with a very strong force, but must attack at the right places and rely on rapid breakthrough across the Golan Heights in order to seize the objectives. Time is against the Syrians, with not only the Israeli reserves arriving, but also as the SAM barrier gets reduced and the effectiveness of the Israeli Air Force grows. The Syrians must strike hard and fast, then fight to hold on to their gains.

Both players have a degree of variable setup that allows enhanced replay value, but still keeps the historical flavor. A historical setup is also provided for those that wish to more closely follow history.

In Golan '73, the FAB series meets modern warfare and now YOU are in command to fight one of the greatest tank battles ever fought.