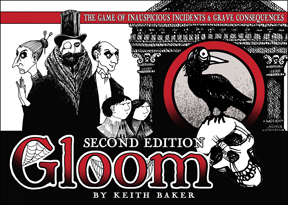 The Game of Inauspicious Incidents and Grave Consequences

In the Gloom card game, you assume control of the fate of an eccentric family of misfits and misanthropes. The goal of the game is sad, but simple: you want your characters to suffer the greatest tragedies possible before passing on to the well-deserved respite of death. You'll play horrible mishaps like Pursued by Poodles or Mocked by Midgets on your own characters to lower their Self-Worth scores, while trying to cheer your opponents' characters with marriages and other happy occasions that pile on positive points. The player with the lowest total Family Value wins.

Printed on transparent plastic cards, Gloom features an innovative design by noted RPG author Keith Baker. Multiple modifier cards can be played on top of the same character card; since the cards are transparent, elements from previously played modifier cards either show through or are obscured by those played above them. You'll immediately and easily know the worth of every character, no matter how many modifiers they have. You've got to see (through) this game to believe it!

Contains:
Awards:
Save this product for later
Display prices in: USD
1-513-201-7672
mrb.rockinbgames@gmail.com
www.shop.rockinbgames.com