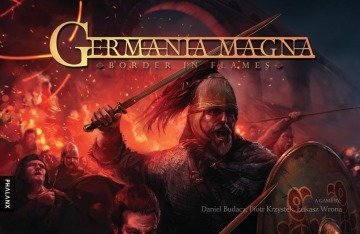 The Alamanni are truly enemies of the entire Roman world. – Emperor Valentinian I.

The Roman Empire has existed for almost 1,000 years. It is, however, but a pale shadow of what it used to be in the times of Caesar or Trajan. The world is changing and new powers are rising; soon they will begin to harass and attack the Roman lands. Deep within the impenetrable and dark forests that stretch beyond the rivers of Rhine and Danube, live brave Germans, who turn their greedy eyes toward rich towns and villages spread across the Roman provinces. It would be, however, a lot easier to pillage and conquer if not for rivalry and constant wars between tribes and warbands.

Germania Magna: Border in Flames is a game of shifting alliances for 2-4 players, which lasts for about 30-60 minutes. Each player assumes the role of a Germanic warlord leading his warriors into Roman provinces, which lie across the Rhine and Danube rivers. The Roman Empire is still too strong to be conquered, but its fields and cities provide loot for your warriors, and its armies give you an excellent opportunity to prove yourself as a worthy leader and, by doing so, to achieve eternal glory for yourself. The enemy is very powerful, so to win you need to forge alliances (however fragile) with other warlords, who will switch sides each time the tide of war changes.

The game consists of rounds (usually 6), which are divided into the following phases:

Preparation Phase in which players receive their Chieftain Card, which has its own unique ability and initiative value. In this phase a new Roman Province appears that may be the target of our invasion. Each province has its own fixed military strength (limitanei) and may be supported by additional forces of comitatenses (Roman Cards).

Supply Phase in which players draw cards from the Tribal Deck and/or gain some additional loot which they can spend to play cards.

Deploy Phase in which players play their Tribal Cards (units, tactics, strategies, attachments) creating hordes that will invade Roman Provinces. You may choose how many provinces you want to attack, and whether you want to cooperate with others or win alone.

The Clash Phase in which battles are fought. Some provinces will trigger their own special effects impacting any battle that will occur on its territory, while others will provide benefits for the victors or change the defeat into total disaster if you allow the Romans to win the day. Players may cooperate to win and gain loot, but there can be only one true victor who will receive the most Glory. That’s why many cards will influence not only the Romans but also other Chieftains (players) changing the balance of forces. Depending on the situation, some alliances will be forged, while the others broken.

The game ends after the last round, and the player who has gathered the most Glory points wins.