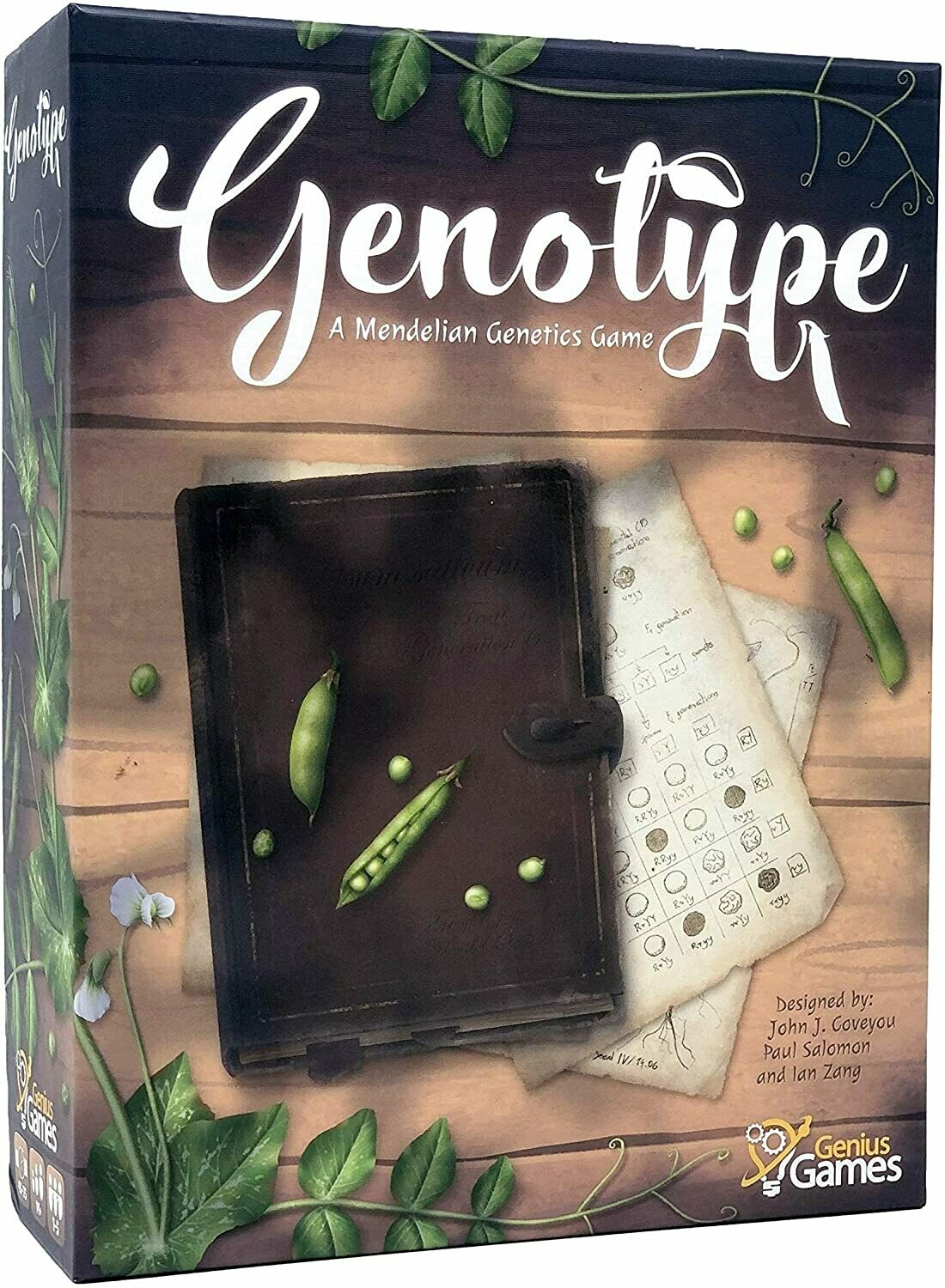 Gregor Mendel is the 19th Century Augustinian Friar credited with the discovery of modern genetics. In Genotype, you play as his assistants, competing to collect experimental data on pea plants by trying to control how the plants inherit key Traits from their parents: seed shape, flower color, stem color, and plant height. The observable Traits of a Pea Plant (its Phenotype) are determined by its genetic makeup (its Genotype). The relationship between Genotype and Phenotype and the nature of genetic inheritance are at the heart of Genotype: A Mendelian Genetics Game.

During the game, players get Pea Plant Cards which show a set of Phenotype Traits they hope to produce and collect (such as pink flowers and tall height) in order to score points. Each round, Dice are rolled to represent Plant breeding, which may result in the Traits players are looking for. After the Dice Roll, players take turns drafting Dice towards completing their Pea Plant Cards or advancing their Research. The Traits produced during the Dice Roll come through the science of Punnett Squares, which show how the parent genes combine, one from each parent plant. By changing the genes of these parent plants, players can influence the likelihood of rolling the Traits they need. The completion of Pea Plant Cards via the Dice Draft is the main way players score points.

Each round consists of 3 phases: Worker Placement, Dice Drafting, and Upgrades.

1) During Worker Placement, players take actions to get more Plant Cards, change the genes of a parent plant, Garden, Research, stake Phenotype claims, gather new Tools, or even position themselves ahead of other players for the Dice Drafting Phase in a couple of ways.

2) Dice Drafting features a couple of interest steps, including the possibility to get first pick of dice, but only for one type of Trait (like plant height), or the possibility to get a pick of any dice, but only after those first picks have happened. De Novo Mutation Dice allow players to change the Trait of other Dice or gain additional Research.

3) The Upgrades phase lets players spend their Research to gain upgrades that let them work on more Plant Cards, draft more Dice each round, or gain additional Workers to be used during the Worker Placement Phase of each round.

Players work to match their Pea Plant Cards to the outcome of the Dice Draft and complete the cards for points. If they've placed a Phenotype marker, they will earn bonus points for every completed card that matches their claim. At the end of 5 rounds, the player with the most points wins.