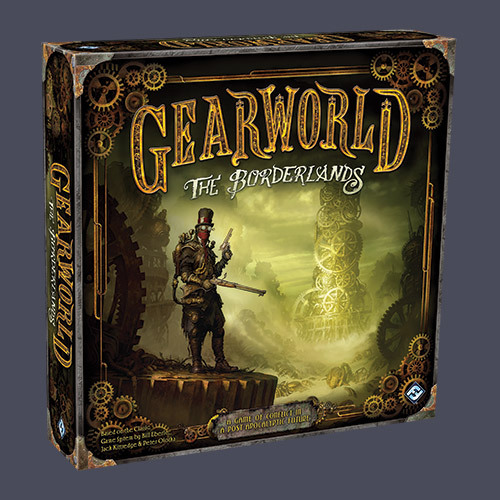 In days before, the gears still turned and the old machines still worked. The sky was clear and blue, and life flourished. Then noxious clouds came and choked the air. Smoke blanketed the sky. Some people departed in flying cities, ascending above the clouds to the World Above. Others dug deep beneath the ground, vanishing into the World Below. Meanwhile, those in the Borderlands watched the world grow dark as the gears ground to a halt.

Gearworld: The Borderlands is a game of negotiation, conquest, and construction in which two to four players compete to gain the favor of the Sky People for their tribe of scavengers in a post-apocalyptic landscape. Based on the classic board game Borderlands designed by Bill Eberle, Jack Kittredge, and Peter Olotka, Gearworld: The Borderlands has streamlined the original rules and re-imagined the game’s setting while retaining its predecessor’s spirit and core mechanics.

When the world darkened, and the Sky People first left the surface behind for to live in the World Above, they took vast stores of energy in order to secure their independence. After generations spent in the World Above, the Sky People’s stores of energy have finally begun to dwindle. Anticipating this problem, the cities’ engineers have drafted plans for great engines known as skyworks. The skyworks will bring the heat of the Fire Below up to power the cities of the Sky People. The Sky People know that the starving, scavenging tribes of the Borderlands are desperate for any goods that they can get, and the Sky People need the tribes of the surface to build their skyworks. Building the skyworks for the World Above ensures a tribe’s survival, and in the Borderlands, survival is all that matters. Gather resources, trade with other players, and battle your rivals in an effort to be the first to develop three skyworks for the Sky People and gain favor for your tribe.

Gearworld: The Borderlands includes a game board with beautiful, detailed artwork, 220 tokens, and 100 plastic figures in four different colors.