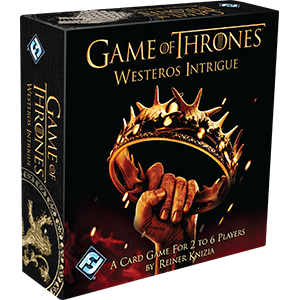 Plot and scheme your way to the Iron Throne in Game of Thrones: Westeros Intrigue, a fast-paced card game for two to six players based on HBO’s Game of Thrones TV series. In this game, you manipulate iconic characters by playing character cards. If your conspiracy can influence characters longer and more effectively than your opponents, you get closer to becoming the new power behind the Iron Throne. If your opponents can outwit you, however, you lose the round and take penalty points.

Played over a series of rounds, Game of Thrones: Westeros Intrigue offers fast fun for all ages. Prepare to intrigue and backstab your way to the Iron Throne!