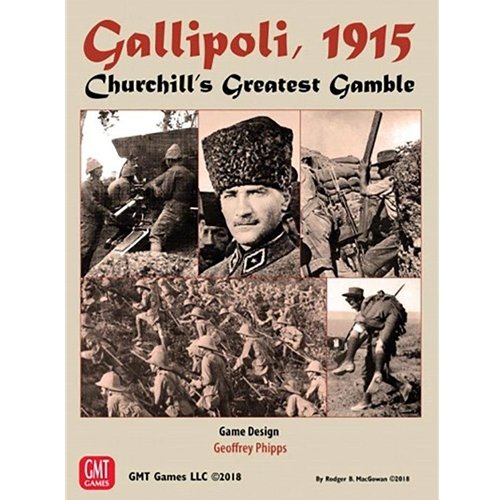 On 25th April 1915, Winston Churchill, First Lord of the Admiralty, launched a hastily assembled force of British, Australian, New Zealand and French troops against the Turkish defenses on the Gallipoli peninsula. Their goal was to capture the forts that guarded the Dardanelles. With that achieved, the British and French Fleets would sail to Constantinople, topple the Ottoman government, and open up a supply line to Russia.

However, defending the beaches was an equal number of Turkish divisions, hardened in the recent Balkan Wars, led by well-trained Turkish officers, supported by advisors from the German General Staff.

An hour before dawn, in complete silence, the Anzacs rowed ashore at Ari Burnu, a place later to be famous as Anzac Cove. The Royal Navy had landed them in the wrong place! Huge dirt cliffs and scrub-choked washouts confronted them, rather than a beach and low dunes. Nevertheless inland they went, overrunning the Turkish pickets, only to become hopelessly confused by the night landing, jigsaw terrain, and inexperience.

Several miles inland, a gifted Turkish Officer, Mustafa Kemal, was reviewing his regiment after night maneuvers above Ari Burnu. Kemal's quick and furious counter-attack saved the day for the Ottomans, and set him on the path to become the founder of modern Turkey.

Further south, at Cape Helles, the Lancashire Fusiliers won six Victoria Crosses “before breakfast” as they ripped through the barbed wire on the beach. The invaders never reached even their first day's objectives, although the Turks only avoided defeat by a hair's breadth. With a different plan, they might have thrown the invaders back into the sea.

Gallipoli 1915: Churchill's Greatest Gamble realistically covers the first three days of the campaign, a time of wild maneuver, of decisive attacks parried by the timely arrival of reinforcements, and the onset of trench warfare. Speed – but not reckless haste – is the key to success.

The map covers the entire peninsula from north of Anzac Cove to Cape Helles, based on the 1922 British Ordnance Survey. Players can choose to land at the historical beaches, or create their own plans.

The game system emphasizes command and control. Players command by Brigade and Regiment. To be successful, a player must plan for the eventual exhaustion of their troops, rotating them out of line to rest and recover stragglers. The result is an accurate modeling of the tempo of these battles.

Infantry combat is ranged rifle and MG fire, culminating in close assault. Artillery is powerful but ultimately limited. Shrapnel from the standard field guns is deadly against troops in the open, but only the rare howitzers firing high-angle HE can deal with trenches.

TIME SCALE: Each turn = 2 hours per day; 4 hours per night