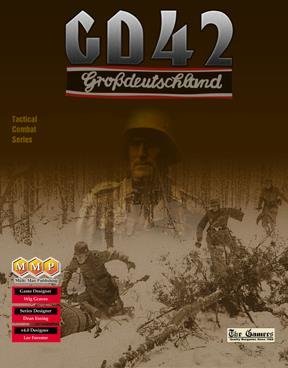 25 November, 1942: As part of Operation Mars, the Soviet 238th Rifle Division, supported by tanks of the 49th Tank Brigade, attacked into the Luchessa Valley, trying to create a breach for the waiting 3rd Mech Corps to exploit. For reasons still unknown, right before the attack the German 9th Army ordered three battalions the GD Division to move to the Luchessa Valley as OKH reserve, thus backing up the weak 216th Grenadier Regiment. Because of the presence of the GD, the Soviets were unable to force a breakthrough and decided to commit the 3rd Mech Corps into the meat grinder to force the issue...

GD ’42 covers the desperate battle for survival of the GD Division as it faced down the entire Soviet 3rd Mech Corps (with over 200 tanks) over several days. Designer Wig Graves conducted extensive research, combing both German and Soviet sources to create the order of battle. The Soviets begin with seemingly overwhelming force, while the Germans trade space for time and attempt to rush reinforcements to the front to plug inevitable gaps. While the Germans are primarily on the defense, careful counter-attacks against the relatively immobile Soviet formations can prove to be key to victory. And if the Soviets do not preserve their forces carefully, they will end with the historical result: stable German lines and an entire mechanized corps wrecked.