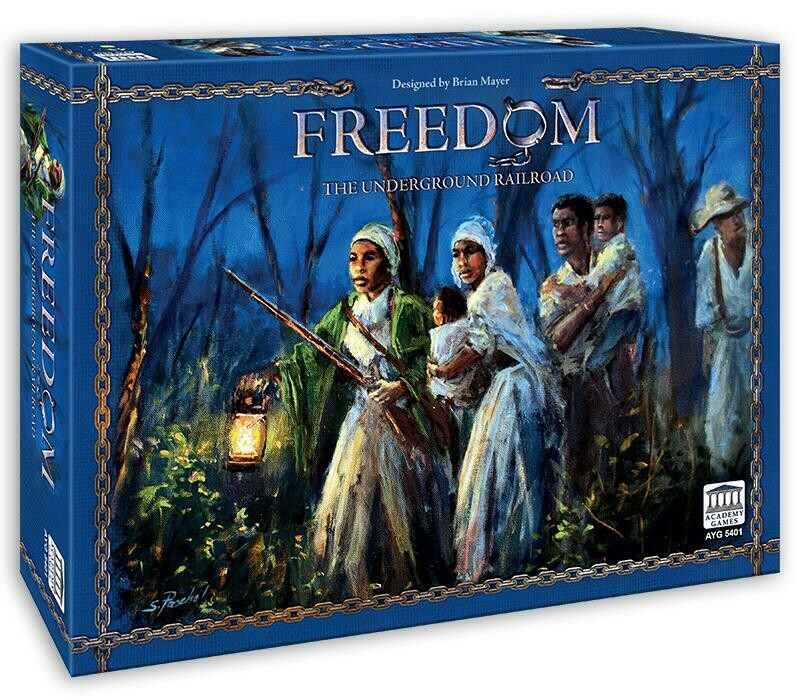 Freedom - The Underground Railroad is an engaging cooperative game for one to four players about a pivotal time in American history!

Players assume the roles of important historical Abolitionist characters attempting to help slaves move from Southern States to freedom in Canada, while avoiding the slave catchers dedicated to taking away their freedom during the early 1800's through the Civil War.

During the game, players need to work together in an effort to achieve two victory conditions. First, the players need to raise the strength of the Abolitionist movement through the acquisition of Support Tokens. Next, the players also need to help Slaves escape from the plantations in the south, moving them north to freedom in Canada while avoiding the Slave Catchers that are roaming the board. If the players are able to achieve both conditions before the end of the game, they win. Of course this is not going to be easy, but through careful planning and strategy, the group can recreate history, helping to bring down the institution of slavery.

The game board consists of two sections. The map on the right features the paths available to both escaping slaves as well as the Slave Catchers who roam the board. The North Star Newspaper on the left holds the resources available to the players during the game, including Abolitionist Cards that feature key historical figures and events.

The game is played over eight rounds, covering the years of early independence up until the end of the Civil War. During the game, players must progress through three time Periods: 1800-1839,1840-1859 and 1860-1865. Each period holds resources that the players attempt to unlock during play. These resources include new Support, Conductor, and Fundraising Tokens, as well as Abolitionist Cards that restock the Abolitionist Queue.

The players must move Slaves to freedom in Canada, which is achieved through the use of Conductor Tokens, Abolitionist Cards, and Player Roles. Only the tokens in the periods you have activated are available for purchase. Each token can only be used once and are depleted quickly! If players do not advance in a timely manner into the next period by purchasing all of the current period's Support Tokens, the Conductor Tokens run out and Slave movement along the Underground Railroad grinds to a halt.

Additionally working against the players are Slave Catchers that constantly react to Slaves that move onto their paths. This can hamper a player's movement options and can even result in Slaves being captured and sent back to the Slave Markets! Even with the best laid out plans, a Slave Catcher can make an unexpected move once per round. This movement is determined by a dice roll.

Awards:
Save this product for later
Display prices in: USD
1-513-201-7672
mrb.rockinbgames@gmail.com
www.shop.rockinbgames.com