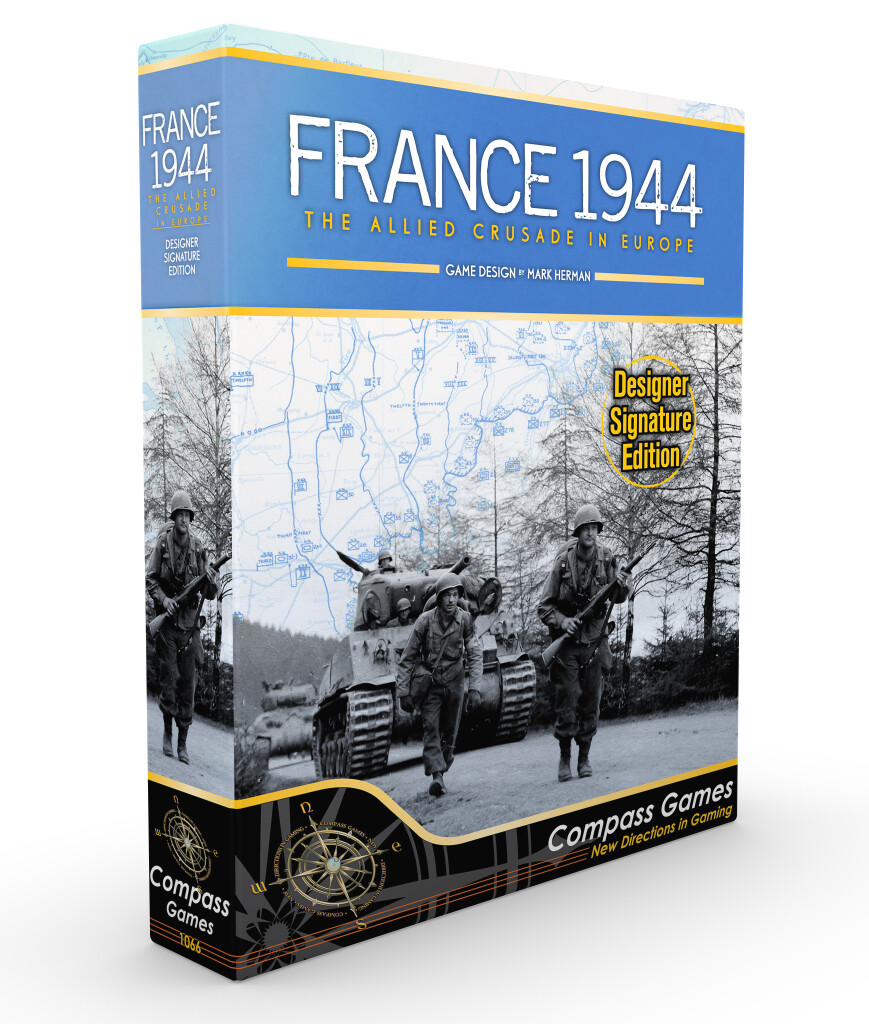 France 1944: The Allied Crusade in Europe, Designer Signature Edition, marks the return of an original game covering the historical events that led to the liberation of France, Belgium, Luxembourg, and the Netherlands during the Allied drive on Germany by renowned game designer, Mark Herman. This new signature edition has been re-mastered and updated and will be linking with an all-new companion game, Russia 1944, slated for release in late 2020.

France 1944 is yet another Classic Reborn by Compass!

France 1944 covers the historical events that led to the liberation of France, Belgium, Luxembourg, and the Netherlands during the Allied drive on Germany that ultimately led to the end of the war in Europe. The game begins with the Allies (British, Canadians, French, Polish, and Americans) already well established in France following the June D-Day invasions. As depicted at the outset of the game, Allied units are still bogged down in the rough terrain near Normandy, and their progress has been slow thus far. Nevertheless, Allied strength has built up at a faster rate than the German. At game start, the Allies are built up sufficiently to attempt their breakout and begin their race toward the German frontier.

This is the game that pioneered Herman’s HQ activation/reaction system where you use supply to activate HQs that in turn activate units to conduct operations. Post an activation the opposing player can use some of his precious reaction points to send a critical unit into the lines to plug a hole or activate an entire army counterattack. This unique Headquarters activation system helps capture the ebb and flow of battle, with options becoming more limited during each monthly turn as actions are expended.

This Designer Signature Edition provides a fully-updated treatment to the 1986 release by Victory Games that honors the original game design while introducing some new design elements and additions. The most exciting addition is the promise of the all-new companion game coming in 2019 covering the East Front, Russia 1944, which will allow you to link both games together to cover the latter stages of World War II across all of Europe. France 1944 introduces an all-new, streamlined combat system (non-CRT based), new Falaise Gap introductory scenario, and the time covered has been extended from March 1945 to May 1945 and now includes a broader territory with additional terrain features that stretches east to Berlin. For your gaming enjoyment, this game has been super-sized and features a mounted map and larger counters to deliver an optimal play experience that can be completed in a single sitting.