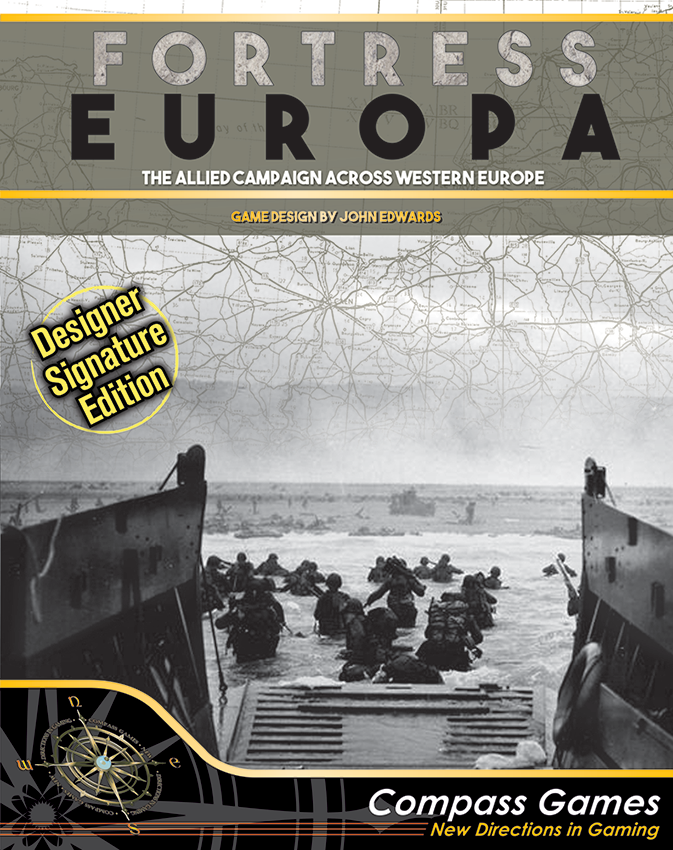 The Allied Campaign Across Western Europe

Fortress Europa, Designer Signature Edition, marks the return of a true wargaming classic by John Edwards, faithfully remastered and updated with this all-new, supersized edition. Celebrated by many as the successor to The Russian Campaign, this two-player game recreates the Allied campaign in Western Europe from D-Day to March 1945.

This edition of Fortress Europa features a super-sized map and counters and is yet another Classic Reborn by Compass.

For over two years, the Allies have been gathering their forces in England, preparing the final plan and its execution. Over three million men have been assembled in England and Africa. The Allied Strategic Air Forces relentlessly strike at railroads, road networks, bridges, and industrial complexes in Germany, France, Belgium, and Holland, attempting to soften up the German defense and stow German production.

The target is Hitler's Fortress Europa.

The Germans have a million and a half men to protect the Atlantic coast of Holland, Belgium, and France, as well as the Mediterranean coast of France. Believing the war will be won on the beaches, they have fortified much of the coast with mines, bunkers, barbed wire, flooded areas, and weapon positions: The Atlantic Wall.

Fortress Europa recreates this epic struggle during the Allied campaign in Western Europe from D-Day to March 1945. The Allied player must select an invasion site and make a successful landing, breakout of the beachhead, drive across France, and push deep into Germany. The Ger­man player must prevent the Allied invasion or else con­duct an orderly withdrawal across France, constantly delaying the Allies, and then counterattacking in the winter.

This Designer Signature edition of the classic John Edwards game includes super-sized components; larger game map and 5/8" counters. Some of the enhancements made in this edition include:

Time: one week per turn