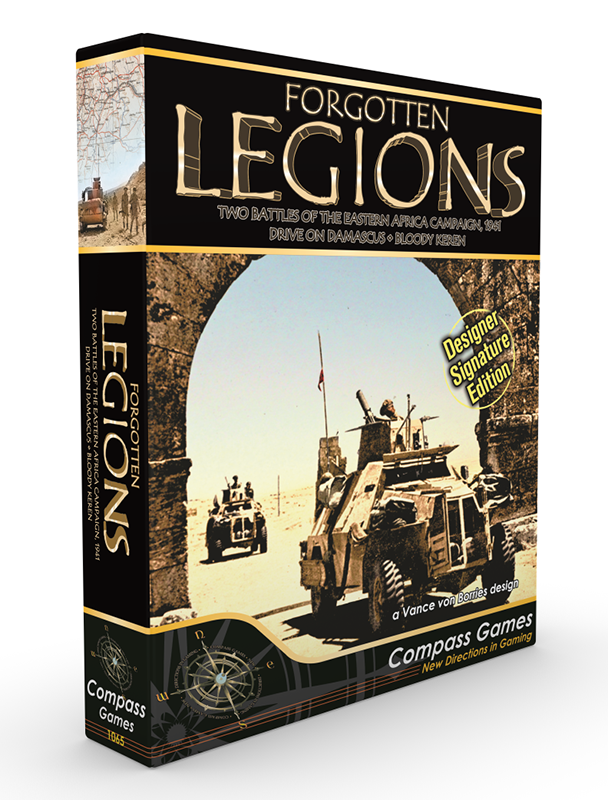 Forgotten Legions, Designer Signature Edition, marks the return of not just one, but two war-gaming classics by Vance von Borries.

Drive on Damascus and Bloody Keren, both now published together for the first time in the same package and with the same basic rules set. They have been re-mastered and updated into all-new, super-sized editions. These were well regarded by many as balanced and thoughtful games. They cover fascinating, almost forgotten conflicts that would guide the course of WW II in the Mediterranean Theater.

Forgotten Legions is yet another Classic Reborn!

Drive on Damascus gives you an operational level simulation that faithfully recreates the (June and July) 1941 Allied invasion of Vichy French held Syria and Lebanon. Here you can hone your game play skills with open maneuvering on the desert side of the map and tough in-fighting on the mountain side. A fluid situation can develop as both sides seek the opportunity to outflank and attack. And along the coast players will probe for vulnerabilities by maneuver and infiltration. An exhaustive Order of Battle based on archival records helps capture key historical facets of the campaign including armor advantage, air power, ranged artillery, flotillas and commandos, garrisons, mountain units, untried units, and more. Also examined is the possibility of a German intervention

Bloody Keren presents an operational level simulation that faithfully recreates the (January through April) 1941 campaign in Italian Eritrea that historically saw a climax at the mountain pass at Keren. Here too, good game play is at a premium as strategically you allocate your forces to various mountain passes. Both sides can attack and counter-attack while guerilla forces attempt to close off reinforcements coming from the south.

This Designer Signature Edition provides a fully updated treatment to the 1981 and 1983 releases by World Wide Wargames (3W) that honor the original game designs. All aspects of the games have been enhanced – rules, charts and tables, map, counters – based on years of player experience and feedback. The rules are common to both games and are short and well-illustrated, along with extensive Design Notes. Each game has a short scenario in addition to the Campaign scenario. While suitable for solitaire-play and designed as a two-player game, each Campaign scenario can allow for up to four players (two per side). This edition serves as the ultimate treatment in paying homage and celebrating the original classic designs by Vance von Borries. For your gaming enjoyment, this game has been super-sized by featuring a larger playing surface (two maps) and the larger 5/8” counters to deliver an optimal play experience that can be completed in a single sitting.

Unit Scale: Battalions with some companies and small brigades