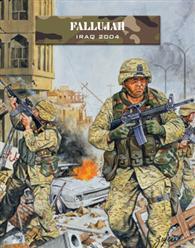 Operations Vigilant Resolve and Phantom Fury – the operations to take and hold the city of Fallujah in the face of determined insurgent resistance – were amongst the most dangerous and controversial carried out by the Coalition forces during Operation Iraqi Freedom. These two battles of Fallujah saw some of the heaviest urban combat faced by regular troops in modern times and, even though much of the civilian populace had fled, the enemy was well-armed, well-prepared and driven by a fanatical resolve. With the scenarios and information presented in Fallujah, the latest Force on Force companion, wargamers will find themselves thrown into the narrow, twisting streets of the city, forced to negotiate IEDs, snipers, barricades, and a multinational insurgent force.