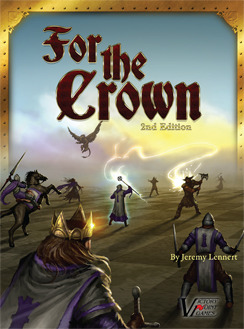 Civil war has broken out between two royal brothers over the succession of the kingdom, and the people of a once-peaceful nation must choose sides and rush to war. Even when the sun goes down, the war for the crown does not cease. While the battle rages on during the day, both princes and their armies still hope to catch the other unawares under the blanket of darkness. Neither side is safe even then, however, and so both princes are well prepared - they've gone through lengths to recruit special units to surprise their enemy, including a Phantom to cloak itself and hopefully use the darkness to its advantage in order to capture the rival King and Heirs.

In For the Crown, you must gather key resources, train an army from scratch, and capture the rival King and Heirs to prove your claim to the throne!

In this game that combines the highly popular "deck-building" mechanic with the most engrossing variations of Chess, do you have what it takes to wisely divide your attention between preparations and military maneuvering? To outpace your opponent’s development while eluding capture? Strategize your position and seize glory in For the Crown!