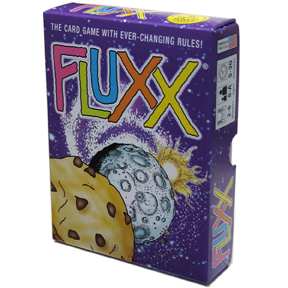 The card game with ever-changing rules!

It starts out simple, with just the Basic Rule card: draw one card and play one card during each player's turn. But New Rule cards quickly make things chaotic.

Even the object of the game will often change as you play, as players swap out one Goal card for another. Can you get the Rocket to the Moon before someone changes the goal to Death by Chocolate?

It all begins with one basic rule: Draw one card, Play one card. You start with a hand of three cards... add the card you drew to your hand, and then choose one card to play, following the directions written on your chosen card. As cards are drawn and played from the deck, the rules of the game change from how many cards are drawn, played or even how many cards you can hold at the end of your turn.