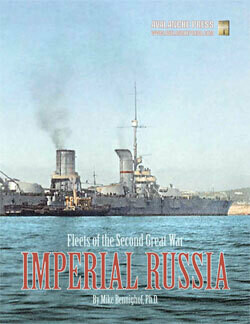 In our own reality, the First World War lasted for over four years, killing millions amid vast destruction and the fall of Eastern Europe’s great empires. In our Second Great War alternative history setting, Woodrow Wilson’s 1916 peace initiative succeeds, leaving the empires intact to fight again a generation later.

Tsar Alexei’s Russian Empire leads the renewed aggression, opening the Second Great War with an unprovoked assault on Poland and the Baltic States that soon involves their Central Powers allies. The Imperial Russian Navy becomes involved in fighting in the Arctic and Atlantic Oceans, and the Baltic and Black Seas, with war in the Pacific eventually following.

The Tsar’s ships range from modernized veterans of the First Great War through new fast battleships. While most of these ships never existed, we’ve designed them along the lines of Russian and Soviet warship development and these are our best guess at what Imperial Russia would have built had the regime survived.

Each warship class is described with ship data similar to that found in warship guides of our own world, and some schematics of their design. It’s a fun add-on to The Second World War at Sea, making this world that never existed a little more real.