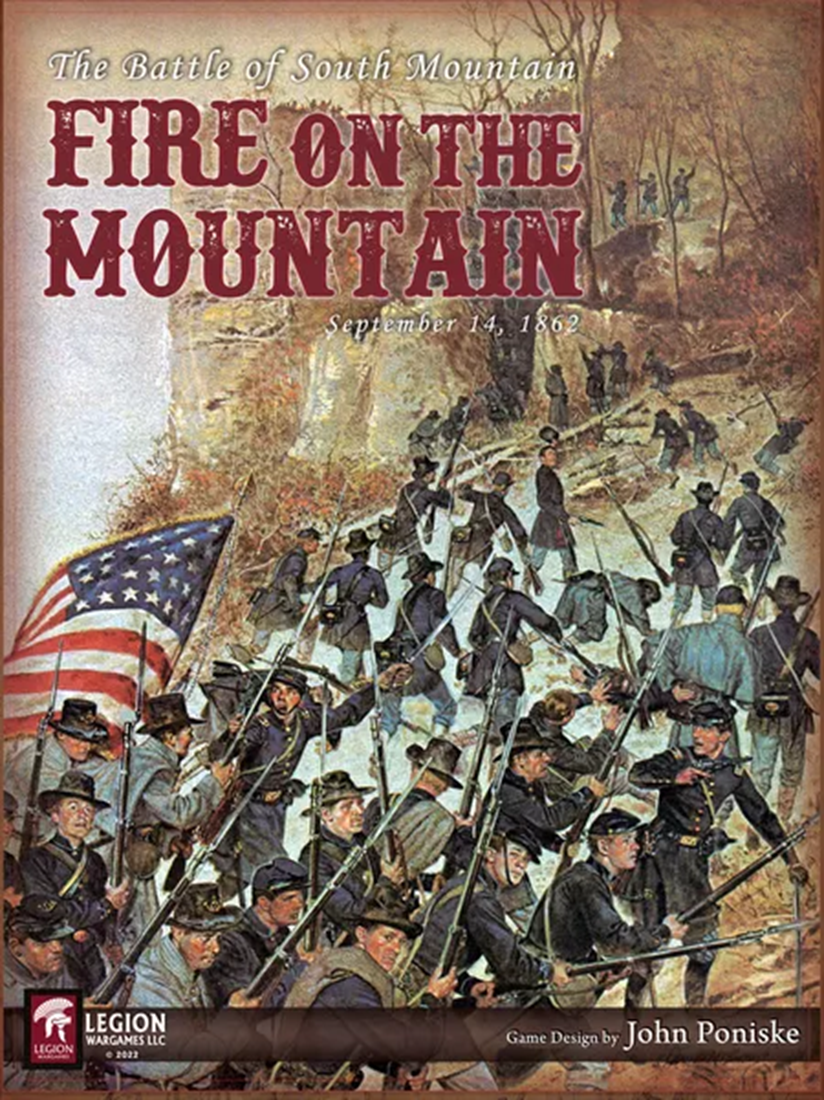 Fire on the Mountain: The Battle of South Mountain, September 14, 1862

Fire on the Mountain is a medium complexity game that concentrates on the action around Turner’s Gap and Fox’s Gap, emphasizing the difficulty of mountainous terrain and the seesaw nature of battle into which reinforcements continue to trickle, as well as the effects that officer casualties had on the battle. The playing board is approximately 2.5 by 3 miles long and each hex is approximately 300 yards across. The basic playing piece is brigade size. Turns are an hour long.

During Robert E. Lee’s first invasion of the North, Lee learned of a threatening federal advance east of Hagerstown, Maryland. Because Stonewall Jackson was besieging Harper’s Ferry, he instructed Daniel Harvey Hill to hold the South Mountain passes in the rugged Blue Ridge, just East of Boonsboro. It was essential to delay McClellan’s progress so Jackson would have time to take Harper’s Ferry and reunite his scattered divisions before the Army of the Potomac caught him unprepared.

Having been misinformed by Stuart that federal battalions were pursuing him, on the 14th of September 1862, Hill assigned a scratch force of Garland’s and Colquitt’s brigades along with the fifth Virginia Cavalry under Colonel T.L. Rosser and several small artillery contingents to defend Turner’s Gap and Fox’s Gap. Colonel Thomas Munford of Mahone’s Virginia Brigade and elements of Robertson’s Cavalry Brigade defended Crampton’s Gap further to the south.

Hill watched with horror as first the Federal VI Corps then IX Corps and I Corps filled the valley and assaulted his positions. Three reserve brigades would not stem the flow of blue. When Lee realized Hill’s predicament he briefly entertained a general retreat across the Mason-Dixon but instead ordered Longstreet to reinforce Hill. Longstreet, who felt South Mountain was indefensible sent Jones’ Walker’s and Hood’s Divisions to the rescue, under protest. Meanwhile, Federal Wing Commander, Ambrose Burnside arrived and provided the timely reprieve Hill needed. As usual, the federals felt they faced a larger force than was the case. Burnside vacillated long enough for Longstreet to strengthen the line

Fighting continued after dark, tapering off just as the Federal II Corps and XI Corps arrived on the field. According to Hill’s report “The mountains are steep, rugged, and thickly wooded, and rendered peculiarly hard to climb by reason of the presence of many ledges and loose rocks. A good many stone fences also were found there, and they afforded much protection to the troops defending the position.” But good defensive positions do not always decide a battle. Confederate forces were severely strained. Crampton's Gap was taken, as was Fox’s Gap and Turner’s Gap held only by the arrival of Longstreet and the greatest effort of will.

Despite strong defensive features, numeric federal forces should have overwhelmed the rebels but the inaction of Pleasonton and Burnside squandered their advantage. In the end, Lee’s defense of the South Mountain passes cost him 2800 casualties as opposed to the attackers loss of 2300 and led directly to the fearful slaughter at Antietam. During the battle of South Mountain, Confederate Brigadier General Samuel Gardner and Union Corps Commander, Jesse Reno, were killed at Fox’s Gap.