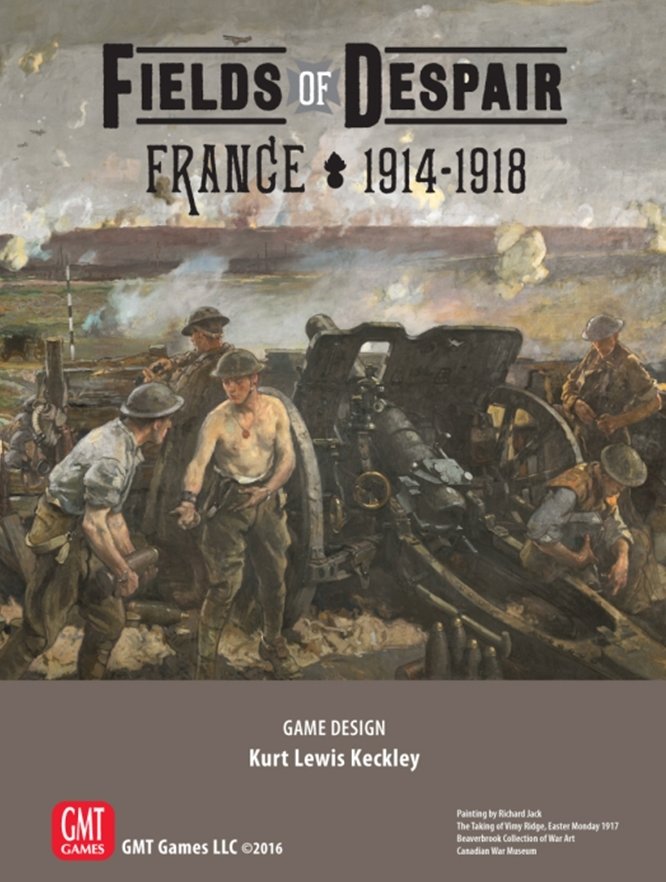 Fields of Despair: France 1914-1918 is a 2-player hex-based strategic level block war game set on the Western Front of the First World War. Players take control of the Allies or Central Powers fighting the war on land, at sea, and in the air all the while making tough economic and technological decisions at home.

Fields of Despair has a unique block system designed to maintain the fog of war throughout the entire game. In most games, block combat values range from one to four. In Fields of Despair the range is zero to twenty.

The range in values makes Fields of Despair a very deceptive game. Players can build up a large force with a single block instead of giving away their strategy with a stack of blocks.

Movement is simple and free flowing. Players are allowed to “make change” during the movement phase. Thus a block with a combat value of 16 could be broken in two blocks of 8 before moving, or conversely two blocks could be combined into one. Zero-value blocks known as “Deception” blocks could also be part of the exchange. Thus after every movement phase you never really know the strength of your enemy.

The fog of war isn’t lost after first contact with the enemy. Blocks remain hidden even when enemies occupy the same hex and stay hidden until one player decides to allocate an air squadron for reconnaissance or sends his men across no man’s land.

Combat is fought in singular rounds and involves the allocation of limited artillery resources across the front. Unlike many games, the active player is not obligated to fight a round of infantry combat. If he wants to sit in his trench and fight an attritional artillery battle that is his prerogative. However, if he does choose to send his men “over the top” all blocks are revealed and one round of combat is fought. After loses are taken all blocks are stood back up as armies retreat back to their trenches.

In Fields of Despair, Allied and Central economies are in a constant state of decline. Therefore, at the start of each turn, the ability to supply troops, keep planes in the air and artillery full of shells, decreases.

Players are given a limited number of Economic Points (EP’s) each turn and must make several tough choices. EP’s must be allocated among war the war efforts of supply capacity, logistics, and artillery or aircraft production and maintenance.

EP’s may also be used to help fight the war at sea and in the East as well as advance technologies of the day including: aircraft improvements (the Fokker tri-planes didn’t invent themselves), chlorine and mustard gas as well as the gas-masks to counter them and tanks.

The wars at sea and in the East are abstracted through simple streamlined systems that affect both the Western Front and the economies of each power.

Fields of Despair includes a 10-turn 1914-1918 historical campaign as well as historical scenarios for the early, mid and late war. Free set up scenarios for all 4 periods are also included which allow for alternate history play. What happens if the Germans never attack Belgium? What if France struck first?