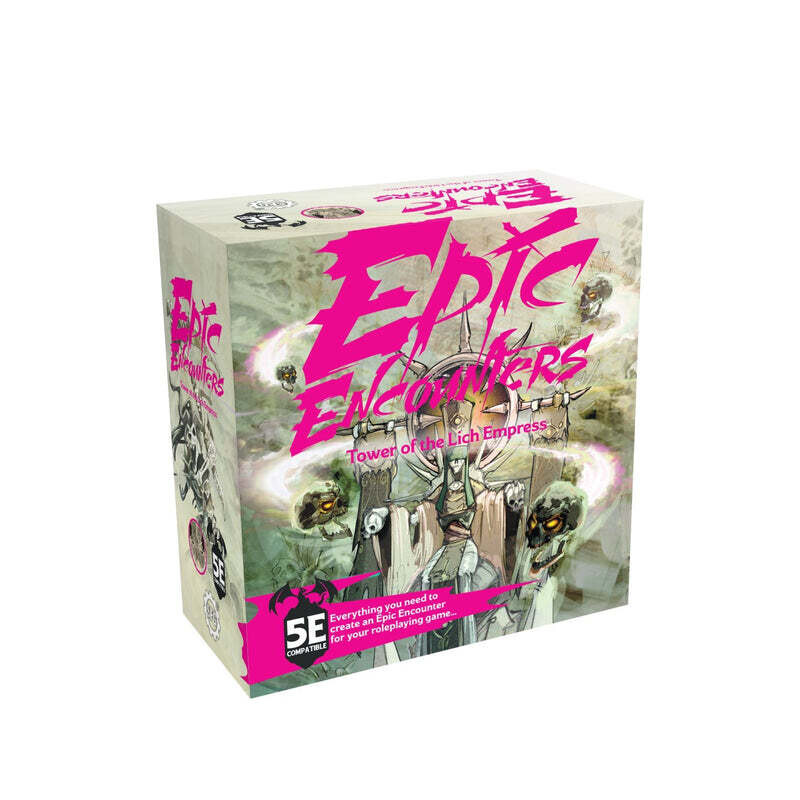 Climb a never-ending tower to confront an ancient evil with this hair-raising Epic Encounters boss box! Compatible with fifth edition or any fantasy roleplaying game.

The endless staircase finally gives way to an enormous ornate door. Intense evil emanates from the room beyond: a Lich Empress. An ancient creature — once a wizard, now something entirely different. Something unnatural, clinging to life through dark magic. Something that does not die. Its translucent skin reveals atrophied muscle beneath; its brain a shriveled vessel for the forbidden lore of civilizations past.

It does not die. But it watches. And it waits.

Inside this boss box, you’ll find everything you need to challenge the formidable Lich Empress, including a large, highly detailed Lich Empress miniature (100mm base!) and an adventure book woven with information to fuel your imagination.

Can you ascend the tower and kill that which does not die? Use Tower of the Lich Empress as a standalone encounter or as part of a new or existing RPG campaign!

Made for new and experienced players, every Epic Encounters set features an all-in-one boxed encounter that’s 5e compatible and ready to play as part of a new or existing roleplaying campaign.

Make your next game night one to remember. With just one box, you can run an awesome, cinematic fight your players will be talking about for weeks!

Match your brave adventurers up against the horrible power of the Lich Empress. Use Tower of the Lich Empress as a standalone encounter or as part of a new or existing RPG campaign. For a truly momentous roleplaying experience, why not use this as the final battle after fighting your way through Arena of the Undead Horde?