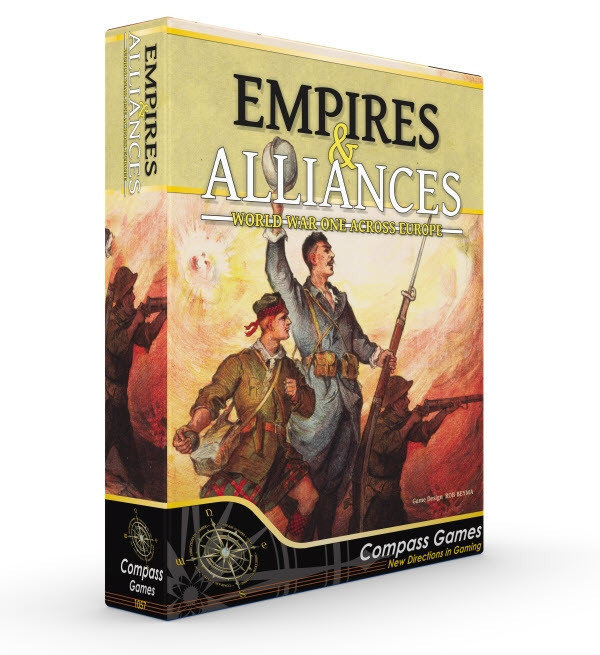 Empires and Alliances: World War One Across Europe

Empires and Alliances is a new and improved game based on Avalon Hill Guns of August also designed by Rob Beyma.

Empires and Alliance is a strategic level simulation of the First World War. Players command the Central Powers and Allied forces that fought in Europe from 1914 to 1918. The map runs from the French Atlantic ports to Moscow and Rostov in the east. The map includes St. Petersburg in the north and Italy, Greece, and the portion of the Ottoman Empire that encompasses modern day Turkey in the south. There are off board Boxes for the Caucasus and the Middle East. Terrain types include forests, swamps, mountains, rivers (along hex sides), lakes, and major and minor cities.

The basic unit is the corps with a few divisions. Most of the minor countries have divisions and the major powers also have a few division breakdowns. There are infantry, cavalry, and army level artillery units. Tanks, air, and Stosstruppen begin to arrive in 1917. Units have historical corps and division IDs. Britain has their professional army at the start and receives Territorial and Kitchener reinforcements in 1915-1916. The British Commonwealth has distinctive Australian, New Zealand, Indian, and Canadian units. The French also have their Colonial and Territorial units.

The armies set up in their historical mobilization sectors. The August 1914 turn is divided into two halves. August-1 has limited movement and regular combat. August-2 is a regular game turn. Thereafter, the game has monthly turns. There are several optional rules – Schlieffen Plan, Plan 17, and the Austro-Hungarian Second Army to better simulate the opening month of the war. There is also a Flexible Mobilization optional rule to allow players to explore other mobilization plans.

The game has a simple game system and a fairly short rulebook. The Sequence of Play features a Reinforcement Phase followed by a Supply Phase, then a Movement Phase and a Combat Phase. Reinforcements continue throughout the war. There are three levels of reduced replacements due to war weariness. There is a clean, simple, and effective supply system that allows players to concentrate on movement and combat. Units expend additional MPs to enter forests, swamps, and mountains.

Combat uses a traditional odds based CRT with strength multipliers and DRMs with a 10 sided die. Unlike a lot of World War I games, it is easier to attack in Empires and Alliances although combat tends to be bloody. Example: The 2-1 column has two Attacker Demoralized results, two Defender Demoralized, two Exchanges, two Half Exchanges, and two No Decision (ND) results. On a ND result, both players lose one corps (their largest). There is also an optional Stosstruppen Infiltration Combat rule.

There is a 1914 scenario which is played on all fronts. The Germans have to contend with a Russian advance as well as concentrating on the French. There is a nine turn 1918 scenario where the Germans need to try to win quickly before American reinforcements overwhelm them. This scenario introduces Tanks, Stosstruppen, and air units. Then there is the four year Campaign Game. Barring a quick victory in 1914, both players settle in for a war of attrition to exhaust their opponent. Britain can blockade the Central Powers and Germany can initiate Submarine Warfare against Britain. Countries entering the war, or war weariness results, can provide strategic opportunities for one player and major challenges for the other. There are Sudden Death Victory Conditions that can end the game at the end of 1916 if either player is doing exceptionally well.