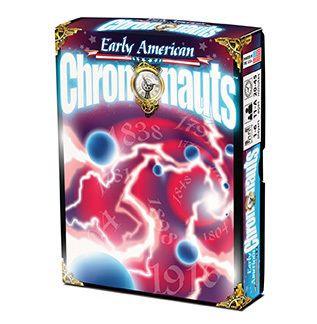 What would have happened if the Boston Tea Party had been prevented, or the Alamo had been abandoned and razed before the Mexican army surrounded  it? What if Maryland had joined the Confederacy… would the South have won the Civil War?  Fortify yourself with a slice of Marie Antoinette's Cake, or a bite of General Tso's Chicken, and hop into your Super Deluxe Time Machine to start finding out the answers to these questions and more, in Early American Chrononauts!

In this game, you are a Time Traveler, with a Secret Mission, a Secret Identity, and a very important job to do: Paradox Repair. You can win by fixing enough Paradoxes, gathering up the three rare and amazing Artifacts listed on your Mission card, or adjusting history in the three ways necessary to allow your character to return to the alternate reality from which he or she originally came. The constant changing of history is tracked by a special layout of 32 cards, called the TimeLine, which functions rather like a gameboard. The three ways to win provide for several different plotlines and layers of action, but you can also split the game up into two less complicated games: Solonauts (The Solitaire Game of Changing History) and Artifaxx (The Fluxx-style Game of Collecting Amazing Stuff).