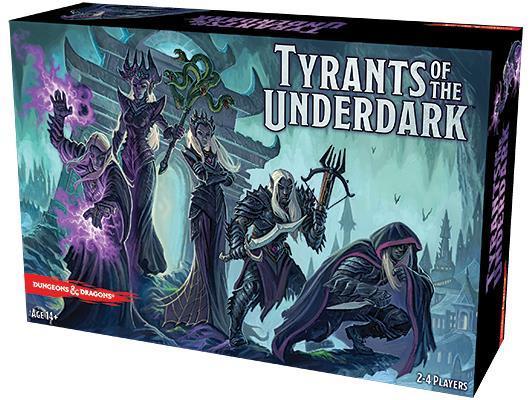 Dungeons & Dragons: Tyrants Of The Underdark

Tyrants of the Underdark™ is a competitive strategy game for 2 to 4 players in which you take on the role of the leader of a drow house. As a drow (a dark elf) your goal is ascension to greater power through control of the Underdark.

During the course of the game, you’ll build and play your own deck of cards that represent the minions of your house and determine what actions you can take on your turn, such as recruiting new minions or deploying troops to the game map. You’ll continually refine your deck, adding new cards while removing others to make your deck more powerful.

Your Presence and ability to control the Underdark is represented by your forces: the troops and spies you’ve placed on the game map.
You may always take certain actions during step 1 of your turn by expending resources. You might also take additional actions during your turn by playing cards.

To win earn victory points (VP) by recruiting powerful minions and controlling important locations in the Underdark. The player with the most VP at the end of the game wins.