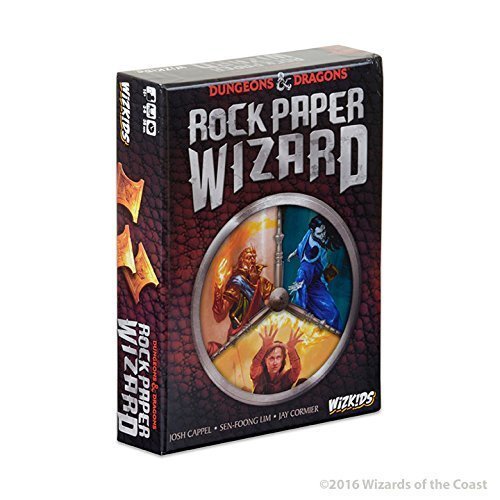 Cast spells and compete against other wizards in an epic race for loot! Rock Paper Wizard is an exciting party game for 3-6 players!

In Rock Paper Wizard each player competes against a powerful wizard!

In this brand new Dungeons & Dragons edition of Rock Paper Wizard your adventuring party has just defeated a fiery dragon in a treacherous cave. Now you and your fellow wizards argue over how to distribute the shares of treasure left behind and do what every self-respecting wizard does, initiate a spell battle!

Choose your wizard’s spell and cast some magic by repeating one of the hand gestures found on the cards in front of you. Everyone says “Rock, Paper, Wizard” aloud, and upon saying “Wizard”, forms a hand gesture and points it towards a target. Each card describes the spell’s effect, which can push an opponent towards the exit, advance yourself towards the hoard, or manipulate the coins each wizard must collect to win.