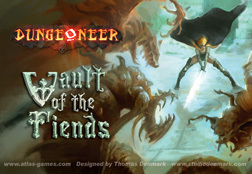 Dungeoneer: Vault of the Fiends

A twisted mage has built an impenetrable vault in which to pursue his heinous experiments. Horrendous fiends now plague the countryside, terrorizing helpless peasants and destroying vital crops. The people cry out for great heroes to confront this evil. Do you have the courage to enter the deadly Vault of the Fiends?

Vault of the Fiends is a two- to four-player Dungeoneer card game. Your character explores a wilderness that you build with map cards, while fighting monsters, completing quests, and leveling up along the way. Each Dungeoneer set can be played as a stand-alone card game, or combined with other decks for more dungeon-delving fun. Vault of the Fiends features 110 new Dungeoneer cards, including fiend-themed monsters and six new heroes for your Dungeoneer game: Gnome Illusionist, Dwarven Runecaster, Ork Shaman, Drakan Sentinel, Human Beastmaster, and Elf Assassin.