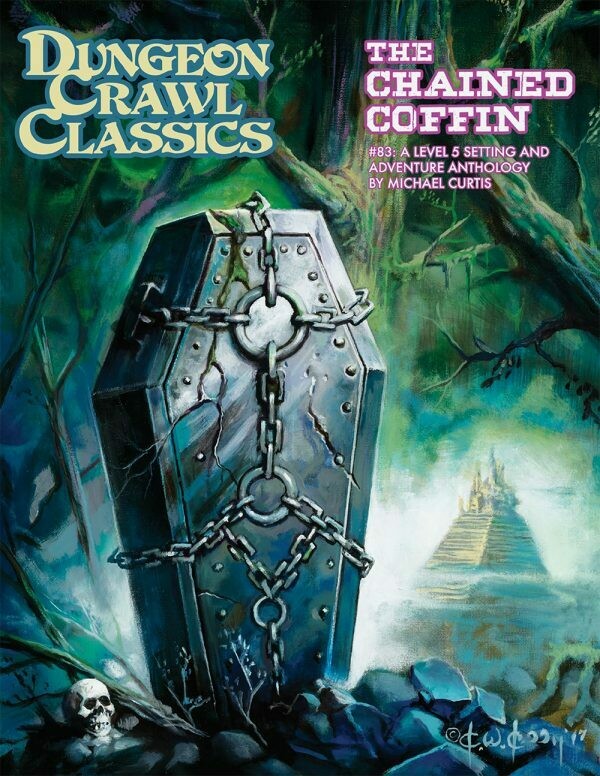 A Level 5 Adventure for DCC RPG

A whispered voice calls from a coffin bound in chains, urging the heroes into the depths of the Shudder Mountains, a place rife with superstition and forlorn secrets. In the shadowy, pine-grown valleys of the Deep Hollows lurk mysteries of a bygone age and a new evil emerging from the ruins of the past. The adventurers must plumb the mountains’ secluded reaches to root out this rising terror before its power comes to fruition. Standing in their path are cackling witches, subtle devils, lingering spirits, and a foul thing that moves in the night. Can the heroes appease that which lies within the Chained Coffin and thwart the dawn of a new and terrible age?

DCC #83: The Chained Coffin was originally released way back in 2014. The boxed set proved immensely popular, and not just for the spinning map puzzle. The Appalachian-style fantasy setting of The Shudder Mountains, inspired by the works of Appendix N author Manly Wade Wellman, provides a unique place for your characters to adventure. Michael Curtis did a wonderful job of bringing The Shudder Mountains alive, and several supplemental volumes were published.

Now we are offering a hardcover book that compiles all material from the original DCC #83: The Chained Coffin boxed set, including all the stretch goal booklets, as well as much, much more:

The Spinning Wheel Puzzle: This adventure includes a number of supernatural locations. The entrance to one is blocked by a supernatural door. This door comprises a special spinning wheel puzzle that forms a central puzzle in the adventure:

Beyond the ancient bridge is a 40’ wide, 30’ deep ledge that lies perpendicular to a sheer rock face. Set into the rocky cliff at the far side of the ledge stands a great stone archway sealed by an imposing door. Blue bolts of lightning ripple silently across the door’s face, hinting at magical wards or seals. In the center of the door are three circular dials set one inside the next. Each dial bears several different symbols, no two of which repeat.

And yes, the hardcover DOES come with the spinning puzzle wheel!