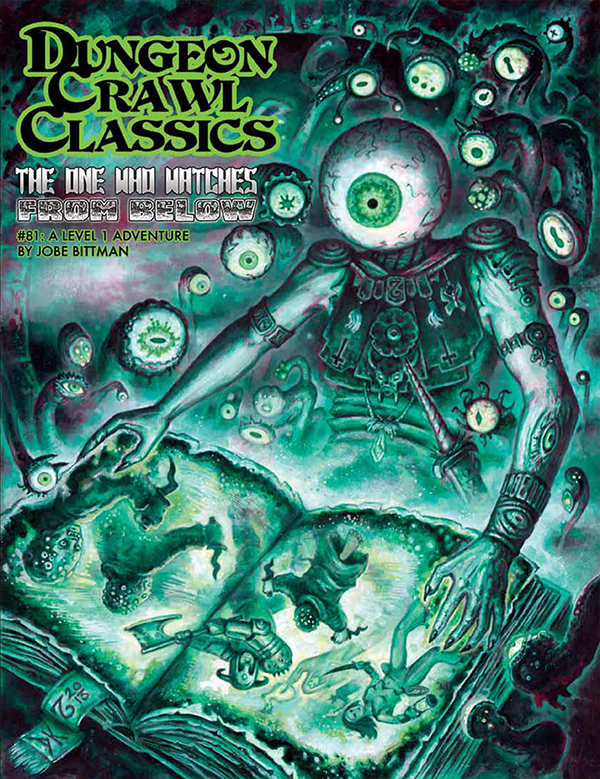 The rumors are true! The secret cave of the mystics holds a hoard of treasure vast enough to buy the kingdom seven times over. Gold coins piled as high as snow banks! Gleaming swords and jewel-encrusted wands crackling with arcane energy! Precious gems as large as your fist! The only thing standing between your present circumstances and a life of fabulous wealth is a pesky, slumbering elder god with a penchant for consuming entire worlds, an endless army of vat-grown hybrid monstrosities, a veritable tidal wave of disembodied eyes with awesome powers, giant acid worms, and a curse with the power to rip the still-living eyes from your skull. Do you have the mettle to stare down a god or will your eyes forever adorn the vault of The One Who Watches From Below?

The winner of the Mystery Map Adventure Design Competition! In June 2012, Goodman Games sponsored a special adventure design competition. Our Free RPG Day 2012 adventure module included an incomplete adventure map. Readers could complete the map, send in their associated ­adventure proposal, and compete for a $1,000 contract to write that adventure. A panel of distinguished judges read the flood of proposals, and finally whittled the field down to a handful of contenders. After lengthy debate, a winner was chosen.

This adventure is the winner of the Mystery Map Adventure Design Competition. There were many great submissions to the competition, but Jobe Bittman’s stood out above them all. This adventure has a strong Appendix N theme, unique encounters that your players will remember for a long time, many highly visual scenes that will stand out in your players’ minds, and some terrific twists and turns. It also features one of the most creative player handouts you have ever seen. Prepare for a very fun time. We think you’ll enjoy this adventure as much as we did.