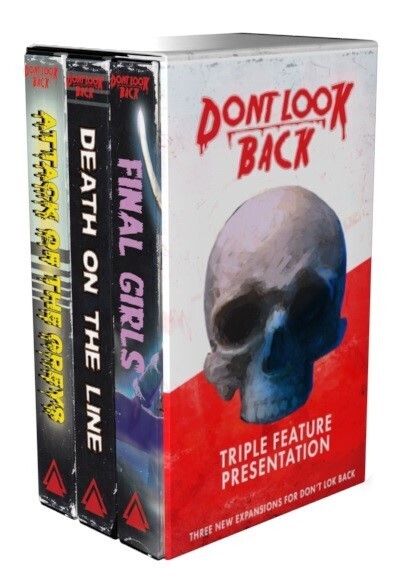 Building off the core Don’t Look Back starter box, players can expand their games of Don’t Look Back with this triple feature expansion pack that expands the core game with additional killers, scenarios and playable heroes packaged in a sleeved set of retro style VHS cases.

Attack of the Greys

They came, they saw, THEY SAMPLED!

Attack of the Greys is a Killer expansion for DLB that introduces The Greys, Small glistening eyed aliens that have arrived in Northwood to collect samples and find host bodies! This expansion offers the first look at using multiple killers and offers new rules for the fright tokens and their use and a brand new Visage along with two new plots! If you are a fan of films like Altered and Fire in the Sky this is the expansion for you!

Strange and beautiful lights have been seen out in the woods and the people of Northwood have been complaining of missing time and waking nightmares. Everyone ignored the warning, and now it’s too late. Now its the Attack of the Greys! Try to escape abduction and make it to the bunkers in the North Hills before you become the next sample.

Death on the Line

Death on the Line Is a Killer expansion for DLB that introduces Boxcar Willy, a chainsaw wielding maniac who lives on the other side of the tracks. In the two included plots the characters will be challenged to escape from his cabin creating a small claustrophobic play area.If you are a fan of Texas Chainsaw Massacre or Hotel Hell this is the expansion for you!

You don’t want to find yourself on the wrong side of the old Sealy Line this time. It starts with a ‘choo-choo’ and ends with a chop! Boxcar Willy is back in all his chainsaw glory with DEATH ON THE LINE. There’s guaranteed to be viscera flying and train whistles tolling in this action packed slasher adventure. Just remember, Willy’s hungry and looking for fresh meat to smoke.

Final Girls is the first character expansion for DLB. In this expansion you will find four new female characters that represent different, interesting, and strong personalities from Northwood. With new abilities and items these characters will offer you a new way to approach and enjoy any plot. Along with four new characters you will also find the Final Girl curse to enhance your story and cinematic experience.

Expand your games of Don’t Look Back with these 4 new heroines. Complete with printed character cards and a final girl curse sheet, these characters will add new fresh playstyles and tactics to your fight against The Killer.

Please note that these miniatures will require some assembly/cleanup and removal from the sprues. We recommend that you have prior experience with assembling/painting resin miniatures.