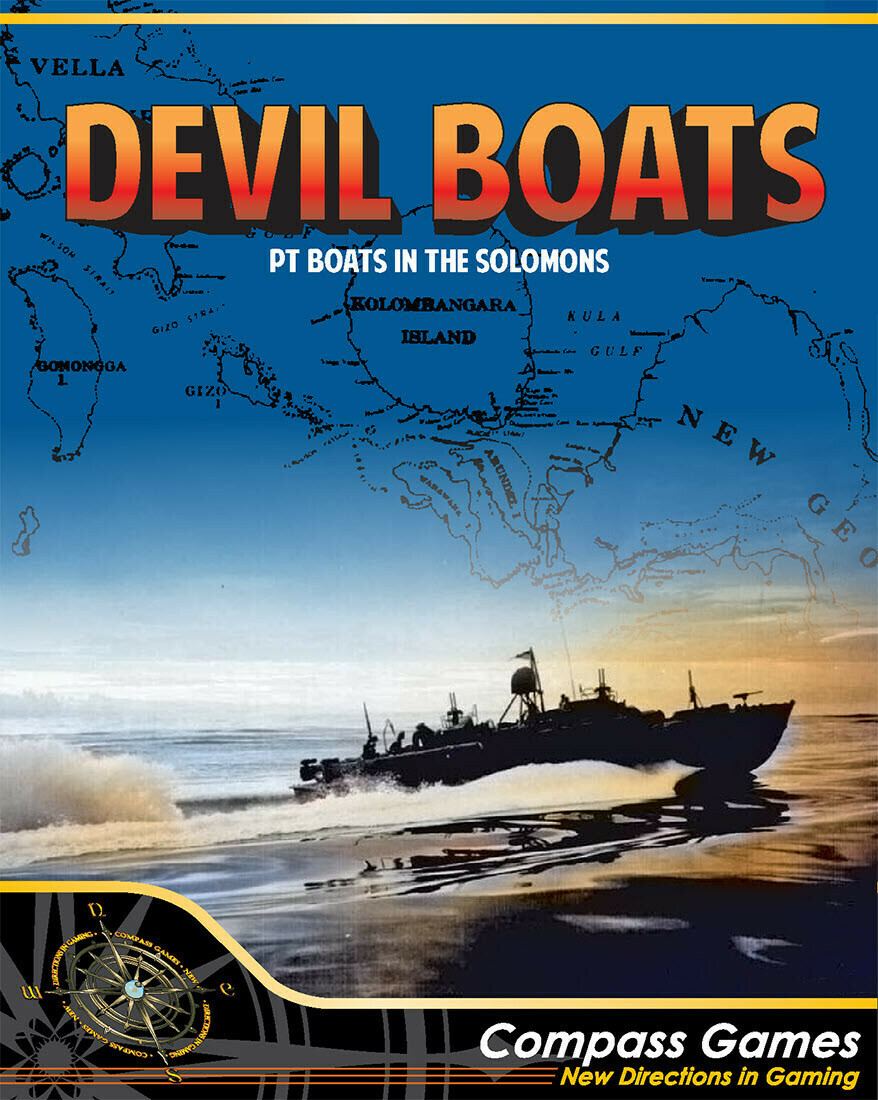 Devil Boats:PT Boats in the Solomons is a solitaire, tactical-level wargame. You, as commander, will lead a squadron of four US Navy PT boats on nightly missions against Japanese forces in the Solomon Islands during the summer months of 1943.

Sleek, fast, and heavily-armed, US Navy PT boats were soon given the nickname ‘Devil Boats’ by Imperial Japanese forces for their ability to suddenly show up out of nowhere, inflict heavy damage, and then quickly disappear again under the cover of night. From General Douglas Mc Arthur’s evacuation from the Philippines in 1942, throughout numerous bloody South Pacific island naval battles, and finally upon the eventual return of US forces to the Philippines in 1945, US Navy PT boats played a small but important role in the South Pacific Campaign during World War II.

Devil Boats:PT Boats in the Solomons covers the months from July to September 1943- the most active months during the campaign against Japanese forces in the New Georgia Islands area as US forces advanced northward. As PT Boat commander, you will lead up to four PT boats on nightly patrols from your PT base on Rendova Island. Your primary goal is to sink as many IJN barges as possible in an attempt to prevent them from transporting troops and supplies to the surrounding islands. But that’s easier said than done, as enemy air patrols and the occasional IJN destroyer will do their best to sink you and your squadron. And don’t think that sinking IJN barges will be easy. They were armored and very tough, requiring hundreds or even thousands of PT gun shell hits to sink. More often than not, they escaped into the night.

You may occasionally be assigned a special mission, such as picking up a downed Allied airman, dropping off supplies to a coast watcher, or even shelling an enemy supply dump. But beware- hidden enemy machine gun nests and shore guns may await as your boats approach the shoreline.

Other hazards you and your squadron will likely face are bad weather with heavy seas, reef collisions, and a multitude of random events.

Devil Boats:PT Boats in the Solomons models 12 individual PT boat crewmen that may be injured, killed, or even come down with Malaria. But if they do survive long enough, their skills will improve. The game also models individual PT boat equipment and components, such as radio, radar, engines, guns, bilge pumps, etc. These components may be damaged or destroyed, perhaps forcing your PT squadron to break off the patrol early, or maybe even disabling one of your boats. Also modeled is PT squadron management, allowing you to conduct PT boat assignments and repairs.

As PT squadron commander, your ultimate goal is to survive the 3 months and destroy as many IJN enemy forces as possible without suffering too many squadron losses yourself. But be careful- play recklessly and lose too many PT boats and you may find yourself relieved of command and sent back to the States, or even court-martialed! But do well and you will earn well-deserved medals, and maybe even change the eventual outcome of the war for the better.

Devil Boats: PT Boats in the Solomons was designed to be detailed, yet accessible to even new players with no prior gaming experience. Gameplay has been greatly streamlined by avoiding the need to memorize a bunch of complicated rules, yet it still retains a certain level of complexity and unpredictability that add to replayability. Most patrols can be completed in 15-30 minutes, with the occasional 1-hour patrol if several enemy convoys are encountered. The option to play Short and Medium campaign games of one or two months is also included. One thing is certain- no two missions will ever play the same.