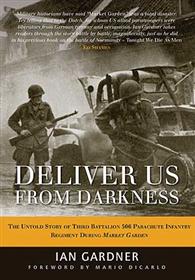 Deliver Us From Darkness

This follow-up to Tonight We Die As Men continues the story of the 506 Parachute Infantry Regiment of the 101st Airborne Division as they dropped into Holland as part of Operation Market Garden. The following 72-day campaign saw the 506PIR constantly on the move, defending various transport hubs around Eindhoven, desperately trying to keep open ‘Hell’s Highway’. From there, the airborne troopers moved north to near Arnhem where they took a new position around Betuwe. For two months, the Americans battled against German tanks, constant artillery barrages and driving rain and they grimly held their ground, until the Germans finally abandoned the effort. Written with the help and input from numerous veterans, this book tells the complete story of many of America’s best soldiers as they fought and died in Holland.