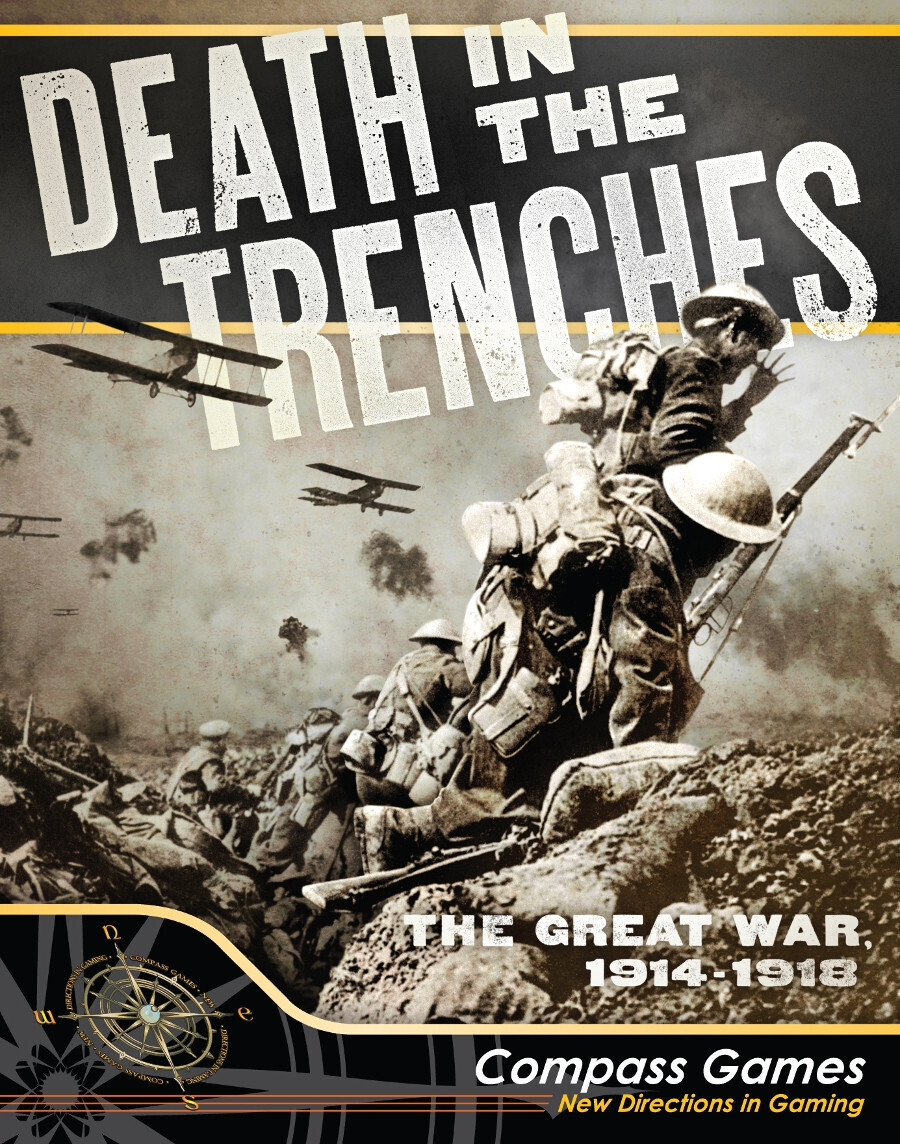 Death in the Trenches

Death in the Trenches is a strategic-level World War I game covering the entire war, from the opening shots in Serbia and Belgium to the final defeat (or victory!) of Germany and its allies in 1918. The map, executed by Jonathan Carnehl, is designed to give you a feel for 1914 by using textures and colors featured in atlases of the time. It stretches from the Pyrenees to Moscow, and from Norway to the Sudan, covering every square inch of territory in Europe and the Near East which saw combat from 1914 to 1918, in a manageable 34×22″ format. Colonial battles around the world take place on an additional 8½x11″ map showing Germany’s empire.

This Charles S. Roberts Award-winning World War One classic is back, in an impressive, brand new, redesigned Second Edition from Compass Games.

The game also features 456 beautifully-illustrated counters depicting all the national armies that fought in the war – from the Germans, French, British and Russians all the way down to the Persians, Montenegrins, Armenians, South Africans, and a host of specialized units (French Foreign Legion, Gurkhas, Italian “Arditi”, Cossacks, Tyrolean Kaiserjäger, Zionists, Bavarians, “Dunsterforce”… even China may send a small expeditionary force).

What other WWI games make ruthlessly complex, Death in the Trenches simulates with elegant simplicity. Face-up units are entrenched; face-down units aren’t! Simple as that. Emphasis is on the fun stuff rather than the boring stuff; there is no bean counting of production points, supply rules and strategic redeployment are easy, and in combat there are no complicated terrain modifiers to memorize – those are baked right into the combat die roll.

Death in the Trenches includes a deceptively simple, short rulebook (with several additional pages of random events) detailing the game’s unique combat system (no CRT!) which portrays the grinding nature of World War I combat in a realistic way that still gives players plenty of options to pursue. The map shows your army-level units, with their divisional components represented off map to prevent map clogging. The production and assignment of divisions has been simplified in this new Second Edition.

The game’s unique combat system lets you choose how many dice you want to throw, and the risk you’re willing to take: you’ll agonize over every choice of “just enough but not too much”. If you “overroll” your target number, it means you just sent your men “over the top” to get mown down. What did you expect? This is World War I! Battles feature a grinding ‘arms race’ where you throw in more and more dice, and more and more Allocations, in classic World War I fashion where you know that just “one more big push” will give you the victory that has so often eluded you.

Endless replayability flows from over 500 painstakingly researched random events, which plunge you into the fiery world of World War I in ways you’ve ever seen before in a game, while helping keep play simple and straightforward. Lenin, the Senussi revolt, intrigue in the Roumanian court, the Cruise of the Emden, the Armenian Massacre, the Sinai Pipeline, the Ukrainian Reactionary Hetmanate, Rasputin, Mata Hari, the Russian shell shortage, the murder of Edith Cavell, Lawrence of Arabia (and his German counterpart, Wilhelm Wassmuss), the Nestorian resistance, Pancho Villa, the Grand Duke Nicholas, Thomas Masaryk, the Red Baron, Czech Legion, Irish Rising, Berber Revolt, air raids, typhus, influenza… they’re all here in ways that actually teach you about the history of World War I.

Players command the armed forces of nearly 40 nations, in a game that still manages to be small enough to fit on your table! It sounds like a massive game, but it isn’t. Death in the Trenches is designed to be played – easy to play, hard to master. You’ll learn things about World War I you never knew before, and you’ll have to face the same crises the leaders of the Entente and Central Powers did. Think you can do better than Douglas Haig and Robert Nivelle? Now it’s your turn.