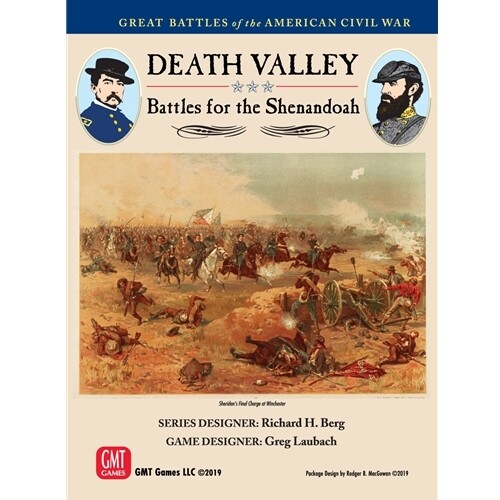 Death Valley: Battles for the Shenandoah

Death Valley: Battles for the Shenandoah is the seventh installment of the Great Battles of the American Civil War (GBACW) series, published by GMT Games. Eight full battles are included.

Three Battles of the Shenandoah Valley Campaign of 1862

In the spring of 1862 Union General Nathanial Banks moved his 38,000 man V Corps into the Shenandoah Valley in conjunction with McClellan’s advance on Richmond. There was no resistance from the 3000 Confederates under General Thomas (Stonewall) Jackson, a hero of Bull Run, then in his first independent command. Confident that all was secure in the Valley, but concerned for the safety of the capital, Washington began to transfer the V Corps troops to defend the city, leaving the 7000 men of General James Shields’ division to block the lower Valley. But Jackson was ordered to keep the Union troops in the Valley from joining forces with those threatening Richmond. After receiving reports that only a rear guard remained south of Winchester, he attacked. The battle was the first of Jackson’s Valley Campaign.

After Kernstown General Banks led a newly reinforced and newly named army of the Department of the Shenandoah in pursuit of Jackson. After a series of Confederate maneuvers Banks lost contact with Jackson’s army. During that time Jackson defeated a Union force threatening his left flank at McDowell and joined forces with the two Confederate brigades defending the mountain passes there. Jackson then turned on Banks. Uniting with another Confederate division under General Richard Ewell, Jackson outflanked Banks at Front Royal and threatened to cut his supply line, starting a race for Winchester. Banks reached the town first and set up a defense south of the town. He had to buy time for the Union supply train to escape.

Following Winchester, Washington sent two Union forces to trap the Confederates in the lower Valley. Two divisions from the Mountain Department under General John Fremont advanced from what is now West Virginia, and one division under General James Shields from the Department of the Rappahannock moved into the Valley from the east. A rain-swollen Shenandoah River separated the Union forces. Jackson engaged both on successive days to end the Valley Campaign.

Five Battles of the Shenandoah Valley Campaigns of 1864

Early in 1864, Union Lieutenant General Ulysses S. Grant devised a plan to attack the Confederacy on multiple fronts simultaneously. As part of that plan Major General Franz Sigel was to lead 9000 men up the Shenandoah Valley to cut the Virginia Central Railroad at Staunton and deprive Robert E. Lee of the Valley's rich resources. Opposing the Union move in the Valley was Major General John C. Breckinridge. The Confederates were able to scrape together 7500 men by including county reservists and the cadets from Virginia Military Institute. Lee could space no reinforcements. After the lead Union forces occupied New Market, Breckinridge attacked.

Grant dispatched elements of three Union Corps led by General Horatio Wright, to pursue Confederate General Jubal Early in his retreat from the raid on Washington. After a victory by the Union cavalry at Rutherford’s Farm and Early’s continued retreat up the Valley, General Wright was convinced that Early was withdrawing to join the defense of Richmond. Both the Union VI Corps and XIX Corps were withdrawn, leaving General George Crook’s 13,000 strong Army of West Virginia to defend the lower Valley. Tasked with tying up as many Union troops as possible, Early turned to attack upon learning that he faced only one Union corps.

Grant consolidated command over the Union forces in the Shenandoah Valley under General Phillip Sheridan. Even though Sheridan commanded a superior force, he remained on the defensive, behavior Early mistook for timidity. When Early undertook a raid against the B&O Railroad, stringing out his four divisions from Winchester to Martinsburg, Sheridan moved to cut off the entire Confederate army at Winchester, initiating the largest battle fought in the Shenandoah Valley.

Sheridan defeated the Confederates at the 3rd Winchester, but he was unable to destroy the army. Early retreated 20 miles up the Shenandoah Valley to Fisher's Hill, near Strasburg, a position that the Confederates had strongly fortified during their occupation of the area in the summer of 1864; however, that summer the Confederates had more troops to man the works and also had reinforcements on the way. Early wrote that it was the only place in the Valley to make a stand. Sheridan saw that a frontal attack was not practical, but was determined to finish what he started at Winchester and push the Confederates out of the valley.

After defeating Early at Winchester and Fisher’s Hill, Sheridan was convinced the Confederates were no longer capable of offensive operations and withdrew the Union army into camps along Cedar Creek. Early, reinforced with a division under General Joseph Kershaw, tentatively pursued. After studying the Union positions, a plan was devised for a surprise attack on the exposed Union left flank. Outnumbered by 3 to 1, the Confederates launched what initially looked to be one of the most successful attacks of the war.

The Great Battles of the American Civil War Series:

This series is one of the hobby’s longest-lived design concepts, springing from the legendary regimental level Gettysburg game – Terrible Swift Sword (SPI) – designed by Richard Berg in 1976. Under GMT, the rules system has remained stable, but has shown remarkable flexibility to allow each game to smoothly incorporate additional rules to reflect the historical battles. The series relies on interactive chit-pull mechanics to simulate the oftentimes-chaotic nature of the 19th Century battlefield at the regimental level.

Changes have been made to the series rules for Death Valley in order to enhance their clarity and simulation value. Veteran players will find the revised rules to be very familiar, with the main differences being in the user-friendliness of the rulebook, as well as how the game "feels", especially for players versed in Civil War tactics.

Death Valley: Battles for the Shenandoah contains eight battle games with multiple scenarios. They range from division level contests on half sized maps to two map battles between armies. Experienced players will be able to play many of the scenarios in one sitting. The rules compare the development of the cavalry, and the changes in infantry and artillery organization and tactics in 1862 and 1864.