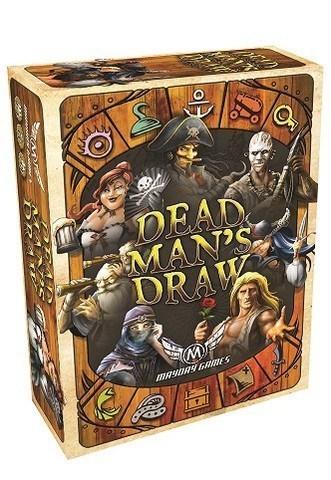 SKU MDG-4316
$17.00
In stock
1
Product Details
UPC: 080162885622
Publisher: MayDay Games
Players: 2-4
Age: 13+
Time: 10-15 minutes
Made In: China
In Dead Man's Draw, press your luck as a pirate trying to amass the most booty. But here's the catch - get too greedy and you could lose it all!
Dead Man's Draw is played by 2-4 pirates in about 10-15 minutes. Players draw cards one at a time trying to collect the most loot, comprised of ten suits with six cards each. Draw different suits and your treasure grows, but get two of the same suit, you Bust and your turn is over. What will it be, Matey?

Tabletop version of the popular digital game by Stardock Entertainment.

Stardock Entertainment created a lot of different variants to play Dead Man’s Draw. Below are some of the variants from the digital versions to offer players new and exciting ways to play Dead Man’s Draw on the tabletop. We hope you enjoy these variants as much as we have. -Mayday games
Thieves Island
Loot Cards that are discarded when you end your turn with a Bust are placed in the Bank of the player sitting to your left instead of the discard pile.
Pile o’ Treasure
All Loot Cards in your Bank are counted for your score instead of the just the top card of each Suit Stack. Example: At the end of the game Zach has a 7 and 2 of Swords in his Bank. Instead of scoring points for the Swords, Zach scored nine points.
Sudden Death
The first player to have 50 points in their Bank wins the game.
All Hands on Deck
At the end of the game, if you do not have at least one Loot Card from each suit, subtract five points for each missing suit from your score. Example: Eliza has 34 points but she did not have any Swords or Mermaids in her Bank at the end of the game. Eliza’s final score is 24 points instead of 34 points.
Strange Lands
Loot Cards bust on numbers instead of suits. Example: Zach draws a 5 of Anchors. Then Zach draws a 3 of Anchors. He does not cause a Bust because the numbers do not match. Next Zach draws a 5 of Swords and causes a Bust because he already has a 5 of Anchors in the Play Area.
Beneath the Waves
Keep your score below 60 and still win. Example: Zach has a score of 60, Eliza has a score of 39 and Ethan has a score of 59. Ethan would win. Zach immediately lost because his score was 60 or higher. Ethan won because he had the highest score without going over 60.
Bottom Feeder
Swords and Cannons take the bottom card of an opponent’s Suit Stack instead of the top card.