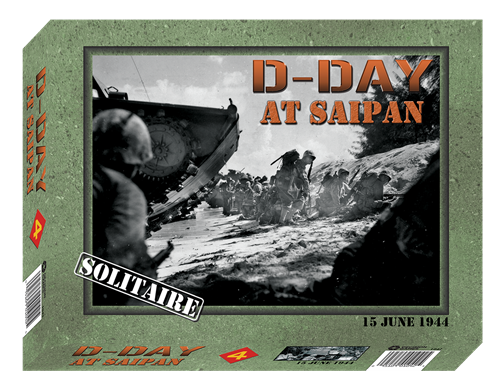 D-Day at Saipan is a solitaire game that simulates the first five days (15 to 19 June 1944) of the US invasion and conquest of the island of Saipan. Despite heavy resistance, over 8,000 Marines of the 2nd and 4th Marine Divisions managed to reach the shore that first morning and by the end of the day approximately 20,000 men had established a beachhead, despite having suffered over 2,000 casualties. Over the next five days the Marines were joined by the Army’s 27th Infantry Division and began pushing inland toward Aslito Airfield and Japanese forces in the southern and central parts of the island. Conquest of the island provided a secure base that put the Japanese home islands within range of B-29 bombers.

In D-Day at Saipan, designer Joe Youst builds on John Butterfield’s award-winning solitaire game system. The player or players control the US forces assaulting the island. The game system controls the opposing Japanese forces. The no-dice combat system highlights the unknown enemy deployments and coordination of the right weapon systems and tactics.

Players familiar with the previous four games in the system will be able to quickly set up and play this latest version. New features include the Japanese units seeking out gaps in the American frontline to infiltrate thus encouraging the player to maintain a continuous line. Also, Japanese tanks may attack via card driven events. These tanks may be joined by other Japanese units and conduct a special tank attack against nearby US units.